Play Anything: The Pleasure of Limits, the Uses of Boredom, and the Secret of Games 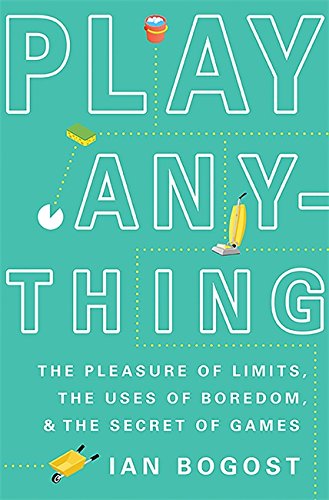 One wishes Play Anything by Ian Bogost would have been more enjoyable a read. From the title and subtitle—The Pleasure of Limits, the Uses of Boredom, and the Secret of Games—one hopes to find a clear manual for some of society’s great ills in the 21st century: overwork, boredom, and the inability to play.

The text is a philosophical and scholarly book that ultimately does make the reader think and raises several issues that have been misunderstood in the past. The new principles that come through to the dedicated reader who plows through the 288 pages are potentially very important and ultimately make it a worthwhile read.

The author theorizes that:

Play is in things, not in you.

Play is not self-expression nor a pursuit of freedom. It is a kind of creation, a kind of craftsmanship.

Fun is not pleasure, it is novelty. Fun is the aftermath of deliberately manipulating a familiar situation in a new way.

The basic experience of play is not letting loose or doing whatever one wants, but carefully and deliberately working with the materials one finds in the situation.

Play is not an active diversion but the work of manipulating a system, of interacting with the bits of logic within.

The process of fun turns out to be work, but not the activity one finds in the workplace. Rather, work like you find when working something fun: working wood, working the muscles, or working the dance floor.

Novelty (and hence fun and play) is looking for the “figure” (a new observation brought into relief) from the “ground” (the background, which has become tedious and commonplace.)

The job of the university scholar is to expand the limits of knowledge with new ideas and observations, then present them in clear fashion to students and the general public. Professor Bogost does a good job of the former, but not so much the latter. Given the hecticness of today’s society, the tendency to work too much and play too little, and our inability to see the humor and playfulness in things or activities, any book that helps us accomplish these tasks is important.

The problem with the book is that it is anything but readable. Even studious reading and re-reading does not at times penetrate its density. The author frequently uses obscure words such as ironoia, autotelic, grok, satisficing, Oulippian, demoscene, spondee, and trochee. Perhaps these are words known to a small fragment of society but they are certainly not used in common parlance.

As a professor, the author would be expected to make issues simple and understandable. The author however, persists in complicated sentences such as:

“An even more constrained, more esoteric and more Oulippian version of computational invention than the demoscene can be found among those who create computer languages.”

“And this perceived ability to make believe is why the philosophical trends of the 20th century, known as postmodernism and poststructuralism are often dismissed as lewd versions of extreme relativism.”

“Of course, when the emptiness of a divested object rubs up against the fictional promise of its future richness, the angst of ironoia sets in.”

There are examples of how to “play anything,” the best of which begins the text. Here he describes his young daughter being dragged through a mall on a series of errands. Rather than being bored or obstructionistic, the girl makes a game of walking carefully on the square floor tiles in a manner reminiscent of the old adage of “Step on a crack, break your mother’s back.”

Even with its dense verbiage, the author could have made the book much better with an additional chapter focusing on the common practical applications of his theory. The examples he does use, such as writing chef programs, palindromes, sonnets, or 4K demos, are ones which although perhaps accurate are outside of most people’s experience. The ideas that the book promotes are worth putting into practice, but only when the reader understands what the author recommends.