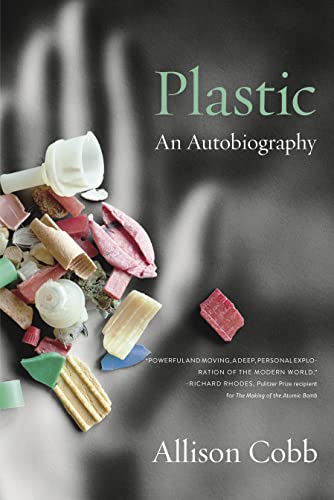 “Cobb is stridently warning us of imminent ecological peril and the need to systemic transformation of our systems of production and consumption.”

Mr. McGuire to Benjamin Braddock: “There is a great future in plastics.” (The Graduate, 1967)

Plastic is ubiquitous—it is cheap to make and can morph into just about any shape or form. As Allison Cobb notes, it is found in everything from nuclear bombs to Styrofoam packaging. Indeed, the vast majority of the stuff is designed as throw-away packaging, an ingenious way in which demand for plastic is constantly reproduced. Because of the constant cycle of discard, it becomes the detritus of landfills, oceans, and just about any other nook and cranny you can find on Earth.

Plastic seeks to tell the story of this substance by tracing it through various objects including plastic from a downed WWII American plane in the Pacific; a radar bomb sight; a nuclear bomb; or the initial found object that started this exploration—a large plastic part from a car bumper found in her front yard.

What follows are 75 short chapters that riff off of these pieces of plastic, and the social, historical, technological, and scientific context around them. It also serves as a form of personal narrative, as well as an exegesis on the research arc that led to the book. There are also interludes where we learn about the politics, economics, and technical dimensions of plastic; its production; and how we learned to throw it away. Occasionally, Cobb also contributes poetry.

The first half of the book pivots from one theme or object to another as if cascading through rapids. It’s hard to keep track of the narrative throughline. The middle part of the book gives us more interesting detail about plastics themselves. The final portion of the book takes on a bit more of a coherent narrative with some chapters falling into something of a sequence, only to then careen off.

If the intention with this structural trick was to mimic the rhizomic nature of plastics, you might argue that this is just a reflection of their nature. However, readers do occasionally need a signpost here and there, even in a highly writerly text—as Roland Barthes would underscore, these are texts that are unstable and demand that the reader constructs meaning. Clearly, Cobb wants this to be a writerly text of fragments infused with poetry and autobiography. It is an edgy approach to a very visceral, material, and dire problem that may kill many in the service of profit. It skirts the fine line between high-concept and self-indulgence.

Along the way we are taken to such far-flung places as Hawaii, where in the Kure atoll plastics pool and accumulate. This is the place where the famous albatross photo was taken that showed the contents of its stomach, filled with plastics. We are also taken to the Texas petro-coast and its petrochemical plants where the stuff is produced, and whose waste creates cancer hotspots. At the book’s end, we are in Lincoln, Alabama, where Cobb’s car bumper plastic part had been engineered into a Honda Odyssey minivan.

The book, in sum, seems to want to do too many things at once. It is a critique of a highly polluting industry; an anti-war declaration; and a memoir of how the book came to fruition, along with intellectual, personal, and familial roles therein.

Cobb chooses to close with a visit to the Honda plant from which her car bumper part hailed. Auto plants typically conduct public tours, and her guide was one Natalie. Unbeknownst to Natalie, Cobb’s child was surreptitiously recording the event. Cobb presents her car bumper detritus to Natalie and wonders if Honda would like it back for reuse. Natalie is, not surprisingly, rendered flatfooted in this “gotcha” moment. It is an unnecessary, but revealing, condescension.

That this closes the book suggests that the foregrounding of the author is of greater importance rather than, say, plastic and its deadly entailments.

Cobb is stridently warning us of imminent ecological peril and the need to systemic transformation of our systems of production and consumption. Unfortunately, this happens over a far too long and winding road where it is difficult to track the book’s many interesting insights and threads of thought because coherent analysis takes a back seat to narrative indulgences.