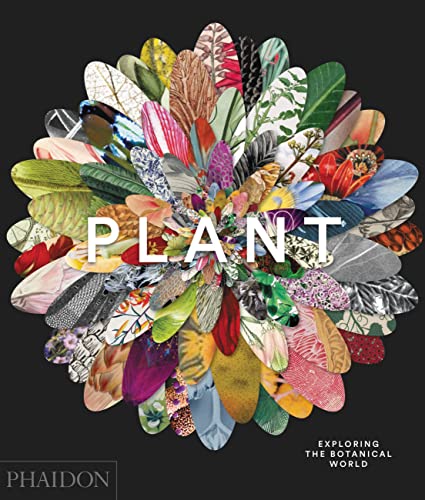 The cover of Plant: Exploring the Botanical World is compelling with its eye-catching, embossed kaleidoscope of floral and leaf images set against a simple black background. For those who are passionate about botanical illustration, the contents are equally arresting.

In the introduction, botanist and plant collector Dr. James Compton writes about the origins of botanical art, explaining how the changing role of plants in human life has affected how they are depicted, from their symbolic and religious roles, to systems of classification, and for their importance to the advancement of medicine.

By the 15th century, the correct identification of plants was recognized as a keystone to cultural, academic, and religious life. Artists were depicting plants from actual specimens rather than reproducing images of plants they had never seen.

Throughout the 16th century, the demand for correctly observed and described plants grew, “obliging their illustrators to achieve new levels of accuracy (aided by improved methods of reproduction, such as engraving).”

The 19th century saw great technological strides in color printing and the development of early photography. Both had a huge impact on botanical art.

Despite acknowledging the importance of the history of plant exploration and the development of improved printing technologies to botanical art, the editors chose not to provide a chronological presentation of the botanical images. Instead, they opted to present paired images, explaining, “Rather than arranging this vast array of he world’s botanical knowledge chronologically or thematically, . . . contrasting or complementary images have been paired in this book in a way that not only highlights the uniqueness of individual artworks and artists, but also reinforces some of the features they share.”

As a result of this decision, a casual journey through the book is entertaining, but does not offer the reader a coherent chronology of the fascinating history and cultural context of botanical illustration. Anyone who wants to more fully understand the development of how plants have been depicted through the centuries will have to work hard to piece together the history, gleaning what he or she can from the paired images and the accompanying explanatory text.

Having said that, many of the pairings are interesting. For example, a 1956 watercolor painting of Gardenia volkensii created by Olive Coates Palgrave is matched on the facing page by a woodblock image of Gardenia jasminoides, created in 1842 by Japanese artist Kawahara Keiga. While the contrast between western and eastern artistic sensibilities may be familiar to most readers, seeing two works side by side is nevertheless illuminating.

More dramatic is the pairing of the early 18th century copperplate engraving of “Plants Found in New Holland” by an anonymous artist with a depiction of “Bush Bananas” created by the modern aboriginal Australian artist Marie Ryder. The explanatory text explains that the image created in 1709 was likely drawn, “from dried specimens brought back to England by the renowned navigator William Dampier from a voyage to Western Australia in 1699.” In contrast, Ryder, “draws on traditional [Aboriginal] dot painting in this celebration of the bush banana, whose ability to thrive in arid areas makes it an important part of the diet of Eastern Arrernte Aboriginal people of Central Australia.”

Another dynamic pairing is an 1820 engraving of a cabbage rose by Pierre-Joseph Redouté with a 2008 3D rendering of a rose cross-section by Macoto Murayama. “[the] architect-turned-artist Macoto Murayama . . . uses software to render hand-drawn anatomical studies of dissected plants and flower organs with mathematical exactness, like engineering blueprints for an alien world. . . . The diaphanous linear mesh of the rendering program describes unfolding clusters of petals wrapped around stamens and anthers, giving the viewer X-ray vision.”

Similarly, Richard Lancake’s 1756 hand-colored copperplate engraving of the night-flowering Cereus scandens (a work that was probably painted from life by candlelight) sits opposite a 1992 cibachrome photogram of a sunflower by Adam Fuss. The text explains that Fuss, “lays objects directly on to light-sensitive paper and uses a variety of exposures to create images that are at once abstract and realistic, transient and fixed. . . . The yellow corona flaming around a seed head that resembles a black hole above the shapes of ghostly leaves gives the image a poignant quality.”

Another type of contrast is the pairing of a colored engraving of the upward growing bloodroot by Jacob Bigelow for his American Medical Botany with a silver gelatin print of downward hanging angel’s trumpet flowers captured by photographer Hannah Collins in 2013. Bigelow’s 1817 book was the first medical reference in America to be printed in color. Today when color printing abounds, Hannah Collins chose black and white photography to document the angel’s trumpets growing in the Amazon rainforest of Colombia.

In 1682, the English natural philosopher Nehemiah Grew published The Anatomy of Plants, which was illustrated with his drawings depicting plant parts seen through a microscope. Featured in this book is his cross section illustration of a vine root, with the details of each cell meticulously drawn. Grew’s image is paired with a color scanning electron micrograph image by Louisa Howard, illustrating the underside of a tomato leaf. The magnification reveals the two types of leaf hairs, one type resembling tentacles, the other like a tiny mushroom.

The annotation for each picture tends to be stylistically turgid, as is evidenced by some of the excerpted examples in this review. Much of the explanatory text is illuminating, providing insight into the artist and his or her techniques and discussing the plant’s history and importance to mankind; however, at times the information jumps from disparate topics, moving, for example, from an analysis of the work of art, to the history and uses of the plant, on to the explorer who discovered it, and back to the artist’s biography. In general the writing style is forced and it’s clear that each caption was written to fulfill the recommended word and character count for the allotted space.

Despite the stylistic failings of the text, this beautiful collection of botanical images is a treasure trove, one worth dipping into in a spare moment as well as delving into deeply to enjoy the creative pairing of images that celebrate centuries of plant illustrations from around the world.