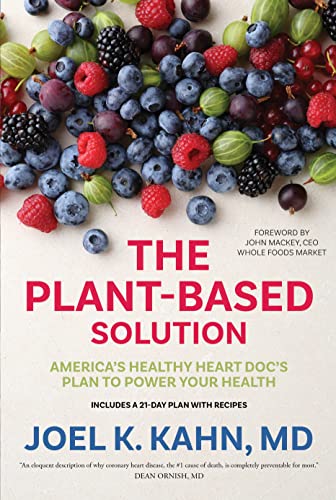 Dr. Joel K. Kahn is passionate about making America healthy. His most recent book, The Plant-Based Solution, offers a blueprint for success. He is intense and angry about the state of American health, and he aspires to educate his readers toward a life free from disease and illness. As the great Jewish philosopher Maimonides wrote: “No disease that can be treated by diet should be treated by any other means.”

Dr. Kahn’s most recent book contains a wealth of information on the causes and cures for heart disease and cancer. As the title suggests, the treatment he offers is a diet of vegetables and fruits, known as complex carbohydrates.

In recent years, the marketplace has overflowed with vegan books that present both the logic and scientific reasons for a plant-based diet. Although Dr. Kahn’s text is not the first to discuss this subject, the issues he addresses are of importance to people in the wellness community and to those suffering from an array of diseases.

The Plant-Based Solution adds to the genre.  The book is easily read and accessible to everyone. His style of writing is totally enjoyable. One favorite chapter, called Grow Plants Not Cancer Cells, offers compelling reasons for beginning a healthy plant-based diet. Cancer and heart disease are on the rise, and Dr. Kahn’s mission is to eradicate these two killers.

Dr. Kahn holds the reader’s interest by offering a number of case studies where his patients have foregone cardiac surgery in favor of a diet filled with vegetables. The early chapters focus on stories of men whose research eventually led to the discovery that eating fruits and vegetables could lead to a medical cure.

From Dr. Walter Kempner, whose patients ate mostly rice and fruits, to Dean Ornish, Nathan Pritikin, Joel Fuhrman and Caldwell Esselstyn at the Cleveland Clinic, food choices have been shown to have positive effects. Although the diets advocated by these men varied, the basic concept was a plant-based solution. Dr. John McDougall, who has been called a “warrior for whole-starch diets,” has been successful by advocating a regime focused on complex carbohydrates from plant sources.

Processed red meats are the culprit in this book, including bacon, pepperoni, bologna, hot dogs, salami, and corned beef.  The World Health Organization, after analyzing health data, found that these foods caused colorectal cancer. Dr. Kahn is outraged at how our medical system contributes to these diseases. Hospitals banned smoking after research linked cigarette smoking to lung cancer but continue to contribute to other types of cancer by offering processed food to their patients.

There appears to be no illness that cannot be avoided or improved with a plant-based diet. Multiple sclerosis, stroke, Alzheimer’s disease, Parkinson’s disease, lupus, thyroid disease, kidney disease are just a few. Dr. Kahn goes beyond his focus on illness and disease and includes chapters on the ethical issues of eating meat. At stake are the environment, the future of our planet and the plight of animals.

For both the novice and the experienced cook, Dr. Kahn offers a template for success. The book includes 21 days of menus and recipes. Although these recipes are typical of recipes found on the Internet and in other vegan cookbooks, they are a reminder of how to be successful.

Many of the recipes do not require cooking skills. One favorite is Mashed Chickpea Salad which is reminiscent of tuna salad and is an easy item to prepare for lunch. Dinner is as simple as a Three-Bean-Chili. Plant-based meals can often be prepared ahead of time and then reheated when hunger strikes. Dr. Kahn offers delicious soup recipes, easy breakfast suggestions, stews and a variety of “bowl” options which include adding a grain and vegetable into a bowl with beans and, if required, topped by a dressing.  Breakfast can be as simple as toasting two slices of bread and mashing an avocado.

The Plant-Based Solution is all about the food we put into our bodies and how a plant-based diet will prevent heart disease, allowing us to live a longer life:  “There is no more effective way to prevent and reverse heart disease than eating a plant-based diet naturally low in oils, sugar, and salt.” The right food will not only improve the heart but also address diabetes, obesity, stroke, hypertension and a variety of life-threatening illnesses.

Dr. Kahn is passionate about his mission and succeeds in instructing readers how to heal themselves. After all, in the 5th century BCE, Hippocrates wrote “Let Food be Thy Medicine and Medicine be Thy Food,” a precept that lives on today.