Plaintiff in Chief: A Portrait of Donald Trump in 3,500 Lawsuits 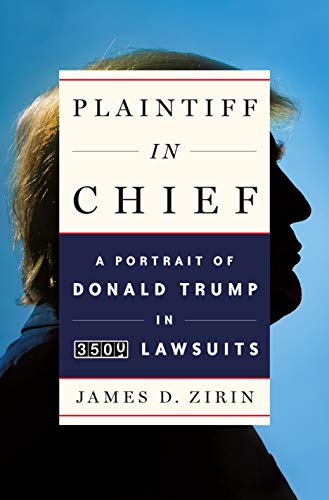 “To the average American, the notion of using the courthouse simply as a negotiating tool or a bludgeon with which to batter one’s enemies, rather than as a place to facilitate justice, ought to be frightening—regardless of one’s political affiliation.”

Author James D. Zirin writes in his new book Plaintiff in Chief: A Portrait of Donald Trump in 3,500 lawsuits: “The adversary system . . . was designed to be the best method anyone ever devised to unearth the truth so the court could fairly administer justice.” But lawsuits are expensive to maintain, and the advantage often goes to the party with a bottomless war chest rather than the party in the right. And that makes it a handy tool for the wealthy to subvert justice.

To the average American, the notion of using the courthouse simply as a negotiating tool or a bludgeon with which to batter one’s enemies, rather than as a place to facilitate justice, ought to be frightening—regardless of one’s political affiliation. Yet, Zirin says, the former, rather than the latter, has been Donald Trump’s preferred use—or perhaps abuse is a better word—of the justice system, suing simply to “make headlines, for the entertainment value, and to reinforce his power over others.”

It’s only fair to note upfront that Zirin, a former federal prosecutor for the Southern District of New York, appears to have an axe to grind against Donald Trump. That’s not to say that his viewpoint lacks merit but simply to remind the reader that Plaintiff in Chief is not an objective work of journalism. At the same time, facts are facts and the reader must draw his or her own conclusions from those facts.

To support his conclusions, Zirin isolates certain lawsuits that he contends are illustrative of the more than 3,500 in which Trump has been involved. That seems like a tremendous number, but even it is subject to some question. The author notes that the American Bar Association pegs the number at around 4,000 and that Bloomberg reports the number is 1,300 just since the year 2000. In other words, Zirin’s 3,500 figure may actually be low.

Rather than adopt a helter-skelter approach to these staggering numbers, Zirin breaks down the litigation into more easily digested, broad topics, each of which is discussed in a chapter of its own. He does so, he says, “as examples to show that Trump regarded the law as an arsenal of weapons to subvert his enemies with outlandish and exaggerated claims.”

Zirin begins with the “first lawsuit”—a 1973 federal action brought by the government against Donald Trump and his father, Fred, for violations of the Fair Housing Act—which whetted Trump’s appetite for litigation as a tool. That, and making the acquaintance of lawyer Roy Cohn in that case. “Cohen taught Trump the ‘art of the lie’—how to lie blatantly and without shame. . . . And Trump would do Cohen one better, he would lie in denying he had uttered lies he had previously told.” [emphasis in original]

Trump’s idealization of Cohn conveniently overlooks the facts that, as Zirin points out, impliedly making a “birds of a feather” argument, Cohn may have been married to the mob and was ultimately disbarred for what was termed “reprehensible conduct.” Nevertheless, the influence of Cohn on Trump endures to this day.

Other chapters include real estate litigation in Manhattan, his involvement in projects with the mob, suits by women who have accused him of sexual assault, and “Trump University and Other Frauds.” Much of what is contained in the book is not new, at least in terms of the headlines. What is new, however, is the level of detail into which he goes to carry his thesis.

“The Constitution, the rule of law, has no meaning for [Trump], not even the constitutional tradition of majoritarianism with protections for minorities.” Readers will have to draw their own conclusions, but whether they agree or disagree, Plaintiff in Chief offers some very distasteful food for thought.