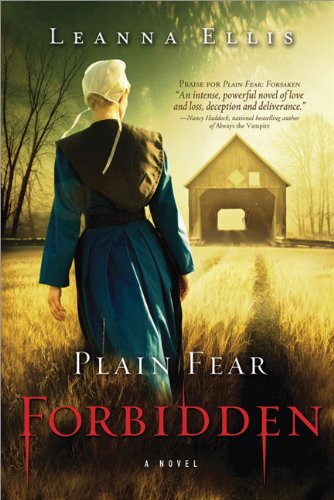 How can Hannah Schmidt be certain that it is God’s will for her to marry Jacob? Amish custom allows teenagers to experience freedom of the world before committing themselves to the rules and regulations of Amish traditions. It is called the “running around time.”

Hannah’s intended, Jacob, is reveling in his free time among the “Englishers” (nonAmish). Far away from home in Pennsylvania for the first time, he has been warned that a certain part of New Orleans is unsafe. But Jacob loves to play with danger. He yearns to live on the edge.

Then Jacob dies. What happened to him during his “running around time”?

It is soon pointed out to Hannah that her unending grief is not the Amish way. She has been taught that no matter what has happened, God’s will is not to be questioned, not even resisted. Living without Jacob makes her life empty, like a creek run dry. How can she ever get over her loss?

In comes Jacob’s brother, Levi, who takes a job on the Schmidt farm so he can be near Hannah. He secretly hopes to persuade her to marry him when her grief for Jacob has subsided.

The author offers up two parallel unique and intriguing stories. The second plotline involves a set of murders occurring in New Orleans. Roc Girouard, a retired police officer, is caught up in solving the three murders—Emma’s, Ruby Yoder’s, and a homeless man’s. What is the connection between these murders?

A series of events leads Roc to suspect he might find clues about the murders within the Pennsylvania Amish community. Soon it becomes clear that the marauding New Orleans killer is a vampire. And, as vampires aren’t exactly your run-of-the-mill criminals, Roc must learn exactly how to hunt one down and overcome it. A priest, Father Roberto, starts schooling Roc in all things vampire, informing the ex-cop that he needs a leather strap with which to bind the vampire and a sharp stick to stab the vampire to death. Edgy and unpredictable, Roc hits a point in his investigation where all roads lead to nowhere—but he is unable to pull himself away from the insanity of a supposed vampire stalking the Amish.

Then a stranger appears in town. Who—or what—is the dark and dangerous Akiva? He says he and Jacob were friends in New Orleans. Akiva, now in his human form, tries to win Hannah’s love, assuring her that they can be together forever. Hannah is entranced by this stranger who, uncannily, bears some remarkable similarities to Jacob. Wouldn’t it be nice to be in love and never have to worry about losing someone again? But will Hannah have to sell her soul to achieve a lasting love?

One night, Hannah finds herself inexplicably drawn to the cemetery to visit Jacob’s grave. She feels an overpowering need to talk to him. Two men secretly follow her—Levi and Akiva–one representing light, the other darkness. Plain Fear: Forsaken is filled with delicious symbolism and references, some more overt than others. For example, throughout Plain Fear: Forsaken, Hannah’s mind is invaded by bits and pieces of music and poetry—Shakespeare, William Blake, Edgar Allen Poe, and Elizabeth Barrett Browning. Are the references mere literary fancy or can these creative masters help Hannah find her own truth?

Popular already with “Englisher” teens, the fantastical world of vampires, witches, and wizards has reached so far afield that it has even penetrated deeply religious and socially circumscribed groups such as the Amish. Leanna Ellis skillfully writes quirky, paranormal teen fiction with a splash of romance, nicely gathering up all her plot threads by the concluding pages. Young adults would never suspect Plain Fear: Forsaken is not aimed at the YA market; Plain Fear: Forsaken is a great read for anyone ages 12 and up.