The Plague Year: America in the Time of COVID 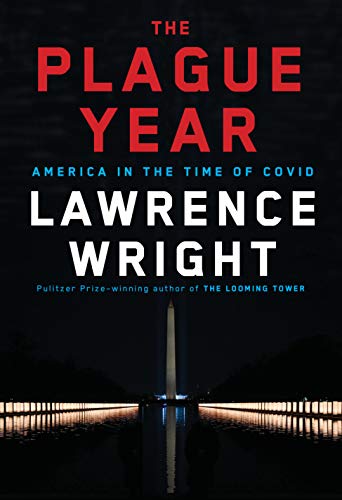 “Many readers will wonder what future generations will make of this sad and epic account of failed national leadership during a health catastrophe. Nailed down by one of our finest writers, the story is almost unbelievable.”

Pulitzer Prize-winning author Lawrence Wright offers a dramatic, comprehensive account of the Covid pandemic as it has played out in America. His subtitle might more accurately read “America’s Failed Response to Covid.” He tells the story of a great tragedy: “Failures . . . characterized the response to the coronavirus from the start,” he writes, as evinced in a lack of planning, mixed messages, and inept leadership.

The key public events in the book will be familiar to most readers. Beginning with the virus’s outbreak in a Wuhan seafood market and the subsequent avoidance of accountability by Chinese officials, Wright traces the spread of the disease and its brutal impact on the United States, where President Donald Trump declared early on, “We have it under control. It’s going to be just fine.”

Instead, having “jettisoned” his predecessor Barack Obama’s step-by-step playbook for responding to infectious diseases, the Trump administration produced a “confusion of authority,” problematic testing kits, scenes of “acrimony” at official meetings, and a plethora of platitudes: “We are marshalling the full power of the federal government and the private sector to protect the American people,” said Trump.

If he had done so, writes the author, “the nation would have had a different experience with the contagion.”

Aside from his recurrent (and necessary) damning of Trump’s poor handling of the crisis (“Whimsey and grievance—what he termed his gut feelings—drove him and the nation that he dragged behind him, but it was never clear where he was taking us, nor perhaps did he know or especially care,” he writes), Wright manages to offer nuanced insights that place the entire period in context. He draws on more than 100 interviews as well as his considerable research on viruses for his recent pandemic novel, The End of October.

He does a fine job describing the workings of the nation’s public health system, its underfunding, and the strengths of Dr. Anthony Fauci and others who spoke from a scientific perspective. He explains the political and economic factors behind lockdowns, Trump’s success in accelerating the development of a vaccine, and the long-standing American antipathy to vaccines that dates to 1796, when Edward Jenner created the first vaccine, for smallpox.

He makes a brave effort to understand figures like Deborah Bix, coronavirus response coordinator, who compromised her scientific excellence by sitting quietly while the president praised an ultraviolet light cure, and National Security Advisor Matthew Pottinger, an influential policy maker who urged Trump to take greater action on the crisis.

He takes us into New York’s Bellevue Hospital (“Running on adrenaline, the staff sometimes had to be ordered to go home, and when they did go home, they couldn’t sleep”); into the CDC and the WHO, and into the bickering between governors and the White House over lack of masks, tests, and vaccines.

He covers the nationwide outburst of protest over the killing of George Floyd, which he attributes as much to deep outrage over the death as to “the simple fact that people were tired of confinement and they had time on their hands.” He calls the January 6 Capitol invasion “the most inexcusable intelligence failure since 9/11.”

In all, there is a surreal aspect to the calamities of the plague year, made all the more apparent when recalled in a rational, well-written narrative.

Many readers will wonder what future generations will make of this sad and epic account of failed national leadership during a health catastrophe. Nailed down by one of our finest writers, the story is almost unbelievable.