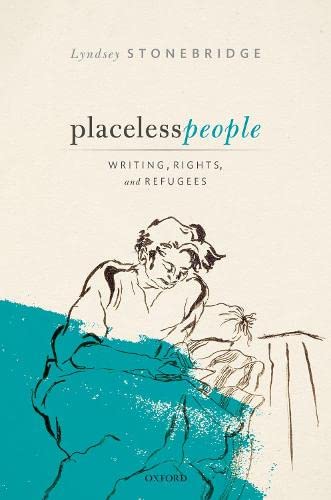 “Placeless People delves deeply into the philosophy of human rights but with easy prose and a structure that would give anyone pause when thinking about our times.”

"The price to be paid for a world made up of sovereign states," as author Lyndsey Stonebridge wrote, are the refugees. They "were—and are—the overlooked victims of modern politics" in part "because the mass movement of people has been normalized over the past one hundred years."

There exists "few memorials to the victims of forced displacement," "the flotsam and jetsam of conflict, the unfortunate victims of history." Since World War II, the cost of forced migration "has been most heavily paid in the Middle East and the global south."

"There have always been refugees, but the forced mass displacement of people in the twentieth century was something new." The refugee and immigrant problems reached crisis levels in World War II and in modern times. Beyond "the Cold War West," it also includes “India-Pakistan, Israel-Palestine, China, Korea, Vietnam, and elsewhere."

For a number of reasons, refugees became "a political and imaginative crisis of the most intimate meanings of citizenship and being." At the same time, this issue challenges "any comfortable assumptions about civil, political, and military rights" "in a world of defensive nation states, uncontrolled ethnic-nationalism, and barbaric bureaucracy."

"This was [is] a world hell-bent on shoring up the borders of nation states with even more baroque systems of bureaucratic control." Since at least the beginnings of the stateless Nansen passports after World War I, passports "not people were the real bearers of rights and human dignity."

Stonebridge points out that Hannah Arendt understood that "a refugee crisis in reality was a crisis for the political and moral authority of the European Nation state, particularly for its historic claim to be the home of the rights of man." Similarly, the United States built by immigrants, many of them refugees or slaves, claimed its right to exist on rights endowed by their creator but has had endless conflict over immigration and refugees.

The author presents in Placeless People the common "rightlessness" of "statelessness" compared to the privilege granted to the persons claiming legal citizenship, usually only by right of birth. Stonebridge documents the history "of large-scale forced migration into the condition of literature itself."

Stonebridge uses a review of Hannah Arendt's work as the structure for Placeless People. The author makes contrasts with the work of such writers as George Orwell, Simone Weil, and Dorothy Thompson.

Eric Hobsbawm, for example, linked "genocide" to "statelessness." That can exist even for people who have not moved from their ancestral homes. Arendt wrote that rights "are human before they are political" or that all people first have a right to have rights.

The author writes of Edward Said's argument that "mass displacement is the product of modern violence and oppression." That literature should not "humanize the inhuman" as that "is to lend dignity to a condition that by robbing people of citizenship—of the right to exist in a community—has deliberately denied them dignity."

Derek Attridge wrote of "no necessary correlation between" "the ethical work sometimes done by literature and the moral and political judgements we may derive from our reading." Stonebridge calls "for literary ethics to amount to something more than literary humanism."

Beyond an extensive introduction, Stonebridge fills this small volume with passages on refugees from the relevant writers on this subject with detailed commentary added. A whole section of the book discusses just the strange irony of "the catastrophe of Jewish statelessness turn into the catastrophe of Palestinian statelessness."

Placeless People delves deeply into the philosophy of human rights but with easy prose and a structure that would give anyone pause when thinking about our times. The author does not preach but rather points out the different credible views in the historiography of the subject of refugees.

This small book makes a fast but thought provoking read. The index, however, does not serve this work well.