A Place to Land 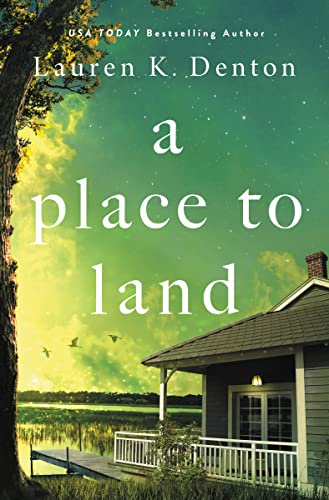 “Lauren Denton unfurls a mystery by reconciling a buried past with a modern-day story set in a town with vibrant characters brimming with Southern charm.”

A delightful Southern story extolling the deep bond of sisters, Lauren Denton’s A Place to Land has a heartwarming tone as it unravels a 40-year-old mystery coming back to haunt a cast of small-town characters whose lives are entwined in Sugar Bend, Alabama, which sits on Little River, with a population of under 2,000 just a few miles from the Gulf of Mexico.

Violet and Trudy Figg have an extremely close relationship. Now both in their sixties, their bond comes from “more than just being sisters, more than sharing a home and parents and a fondness for chocolate pudding.” From elder sister Violet’s point of view, “It was a single request from their fragile, damaged mother that linked them with something thicker than blood.” “With a father who was often out on the road in his eighteen-wheeler, and a mother who spent most of her energy dodging blows . . . Violet had accepted her role of Trudy’s caretaker long ago.”

In their youth, the sisters were complimentary opposites. Trudy enjoyed a wide reputation as a popular beauty pageant queen, while Violet was the quiet, introspective sort who spent most of her time outdoors.

The sisters now keep a steady schedule. “Trudy and Violet both navigated life the best way they knew how—for Trudy, it was working with her materials and setting the pieces just right, while for Violet it was through the birds . . . helping them on their way.”

Trudy creates eclectic visual art with the likes of shells, feathers, and driftwood, while Violet works as a surveyor for the Coastal Alabama Audubon Society. Together, the sisters own and operate Two Sisters Art and Hardware Goods in downtown Sugar Bend, where Trudy’s art is sold alongside souvenirs for tourists.

Eighteen-year-old Maya is seeking her place in the world. She’d “been put in the foster care system after the death of her grandmother, and she’d lived in ten different homes since then.” After turning 18, Maya signed the appropriate papers permitting herself to strike out on her own, and following her instincts, she stumbles upon the quaint town of Sugar Bend, which leads her to Violet and Trudy. After a dubious beginning, the sisters come to embrace her.

Frank Roby has an unhealed past with Violet. A retired law enforcement officer, his long ago romance with Violet came to an inexplicable end, which caused him to jump at the first opportunity to accept a job in another town. After 40 years, Frank moves back to Sugar Bend from Pensacola as a widower. In rekindling his interest in birds, he goes to a class at the local Audubon Society, where he is unwittingly paired as a trainee with 63-year-old Violet. Cautious and still harboring feelings for Violet, he keeps his sentiments for her under wraps.

Liza Bullock is an outsider who’s worked for a year as the editor of The Sugar Bend Observer. Frustrated by living in a backwater, uneventful town, “If she could find a story with enough meat on its bones, she could write a sizzling expose and land herself at a copy desk in Birmingham or Atlanta.” When a decrepit johnboat “awash with age and river detritus” mysteriously rises from Little River, Liza’s reporter instincts are ignited.

Frank Roby’s nephew works as a Sugar Bend policeman and is in the habit of asking his retired uncle for assistance. When he asks Frank to investigate the suspicious boat awash on the banks of Little River, memories of the year 1981 flash to Frank’s mind, when he was a rookie cop in the throes of a promising future with Violet and was sent to the exact location to investigate a domestic disturbance.

Unbeknownst to the young Frank of 1981, Violet’s sister had recently married local celebrity, Jay Malone, a successful businessman the whole town revered, and who owned the house Frank was sent to look into. At the time, Frank was unaware Violet had fears for her sister, that she suspected there was more to Jay Malone than met the eye, and that the bruises Trudy tried to hide were inflicted by his hand.

Author Lauren Denton unfurls a mystery by reconciling a buried past with a modern-day story set in a town with vibrant characters brimming with Southern charm. Secrets, coincidence, family loyalty, life choices, and questions of right versus wrong as viewed through the lens of the law are woven neatly in two timeframes, seamlessly linking all characters until they each achieve, seemingly by kismet, the perfect place to land.