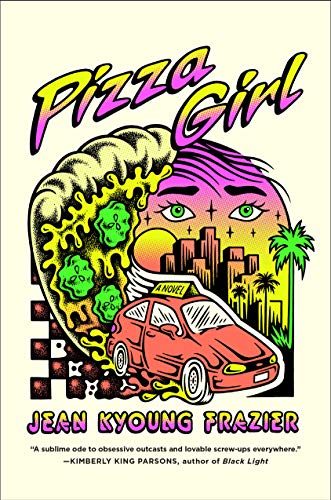 Jane, the so-called “Pizza Girl” of this debut novel by Jean Kyoung Frazier, lives in her own head. She works at a takeout pizza joint, delivering pizzas to a regular crew of characters. She sees them often, knows their favorite pizza, but knows nothing about what they’re really like.

Why does that smiling couple always answer the door arm in arm? What makes them so happy? Jane imagines they and others are what they appear to be but, as she eventually learns, people are much more complicated than the pizza they order.

And then one of those customers lets Jane into her life. The customer’s name is Jenny, and she calls the pizza place one night when Jane is working. Jenny is desperate and in high drama because her family of three has just moved from Bismarck, North Dakota, to Los Angeles and her son hates it and won’t eat anything.

What he really likes, Jenny tells Jane, is pizza with pickles but no one is willing to make it. She’s called a bunch of other pizza places but they refuse. Will Jane please say yes? Jane, fresh out of high school and pregnant, is happy to oblige. She’ll do pretty much anything to try and shake up her moribund life. And there’s just something about this Jenny woman.

“I looked at the clock and saw that I’d been on the phone for over five minutes. It was the longest conversation I’d had with someone other than Mom or Billy in weeks,” Jane says to herself.

Jane’s father is dead, and she lives with her mother and boyfriend Billy ,who is strangely devoted to Jane despite Jane’s almost complete indifference toward him. Whenever she’s home, Jane seems to spend all her time in her father’s shed out back, the shed where her father drank himself to death. Jane has a seeming death wish of her own and spends hours there each night downing beer after beer and trying to understand what her father was thinking all the hours he spent there.

When Jane delivers the pickle pizza, she finds Jenny to be an irresistible character. Jane is mesmerized by Jenny’s high ponytail and the way she speaks. In Jane’s eyes, Jenny’s life—with her always traveling and absent husband and sulky, pickle-pizza-eating son—is akin to the drama of a Tennessee Williams play.

Jane is completely taken in by Jenny: “She walked me to the front door and hugged me and I didn’t mind. She smiled and I wanted to bottle it up, pour it over my morning cereal.”

Jenny becomes the center of Jane’s life and she gets in deep, casting aside everyone else in her life to focus on Jenny. She develops a major girl crush that accelerates when the two exchange a kiss.

Revealing much more would ruin the story which continues to rush forward with a kind of aching desperation. One can easily see this as a film. It has the drama and plot points that keep one reading, and the novel is well written with some heart-breaking insights.

In a flashback, Jane’s father delivers this talk to her as he tries to make her understand why she can’t stop drinking.

“I think some people are just born broken,” Jane’s father tells her. “I think about life as one big laundromat and some people just have one little bag to do—it’ll only take them a quick cycle to get through—but others, they have bags and bags of it, and it’s just so much that it’s overwhelming to even think about starting. Is there even enough laundry detergent to get everything clean?”