The Pitcher and the Dictator: Satchel Paige's Unlikely Season in the Dominican Republic 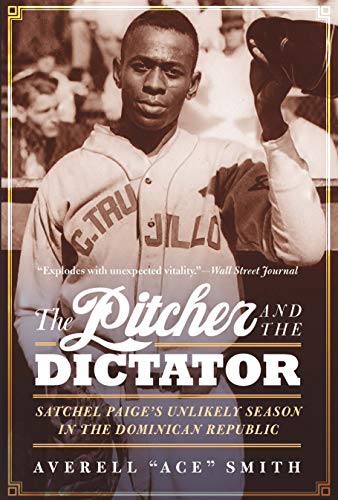 Given the title, The Pitcher and the Dictator, it would seem that this is a book about Satchel Paige and the legendary short season that he played in the Dominican Republic while in the employ of Rafael Trujillo, one of the most notorious of Latin American dictators. If nothing else a microscopic examination of Satchel’s 1937 baseball season in the Dominican, as well as the details of Satchel and his team’s relationship with Trujillo, might be expected.

Sometimes titles are deceiving. That is the case with Averell Smith’s entertaining volume. The focus is not just the 1937 season, nor is it on Satchel Page or Rafael Trujillo. It is really more about life in the Negro Leagues and those years and seasons surrounding 1937, stretching at least a decade in either direction. It is also about many of the great players and owners of Negro League teams and the great Latin players who did not join the Negro Leagues, giving it a scope well beyond the baseball life of Satchel Paige.

If there is one clear subject of this book, it is these great players, who together constitute a group of some of the very best players in the history of baseball. Those who played in the Negro Leagues and with Barnstorming teams in the United States had limited visibility in the national baseball community. Those who played in Cuba and other Latin countries had even less visibility in world of U.S. baseball.

All of these great players operated at the margins in terms of fame and glory, as well as financially. It was very difficult to make a living in baseball outside of the North American leagues and teams. This is one of the realities that comes into sharp focus in The Pitcher and the Dictator revealing the injustices inherent in segregated sport in America’s National Pastime.

Satchel Paige’s career encapsulates much of the injustice. His life in baseball was at times that of a vagabond. Paige moved from team to team in search of the dollar, but often he played in less than ideal venues, for less money that would have been his in the American or National League. The same can be said of many of the great players that Paige played with and against.

Smith offers short profiles and mini-biographies of such great players as Josh Gibson and Cool Papa Bell. There are very interesting descriptions of baseball in Latin America and portraits of such greats as Martin Dihigo, Tetelo Vargas, Perucho Cepeda, and Luis Tiant.

In addition Smith reveals the viciousness of Rafael Trujillo in both his personal and public actions. There is a sense of the horror of this regime and the size of the ego of this little man who survived because he served the interests of American corporations and the U.S. government.

However, if what is wanted is a full biography of Satchel Paige, then it would be better to go to Donald Spivey’s If Only You Were White, or Larry Tye’s Satchel. Both treat Satchel’s sojourn in the Dominican Republic and both separate myth from reality on this and other subjects surrounding Paige.

This is not to say that Averell Smith’s treatment is not worth your time. It is only to say that it delivers less than promised in the title. Overall the writing is smooth, the stories are interesting, and Smith offers a good introduction to the world of African American and Latin Baseball players who starred in various venues open to them outside of major league baseball in the era of segregation.