Pirate Chicken: All Hens on Deck 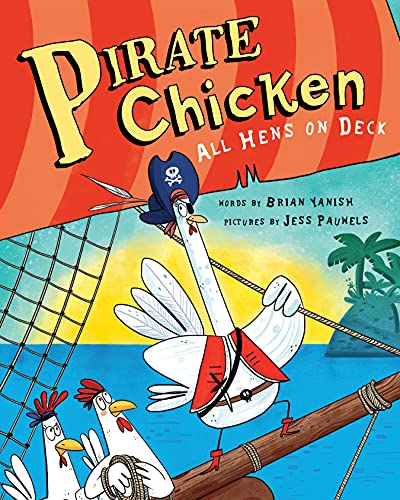 “This book can be read over and over, because there is always something new to see in the art, and the puns are so punny. . . . The title and jaunty cover art make this book a winner.”

Pirate Chicken: All Hens on Deck is a punster’s dream come true. When pirates came to town, Lily, the chicken, was ready to report for duty. The pirates gathered up the chickens but then went ashore to party one night, and their ship drifted away. Now the chickens were in charge.

Lily called all hens on deck. She taught them how to handle the ship, and they sailed to fantastic new lands and did the chicken dance. Lily turned to the dark side and decided to plunder like a real pirate. Her new name was Redfoot. She was a tough pirate captain, and the chickens declared mutiny. They were tired of Lily eating all the feed, demanding the cleanest ship, and giving the hardest homework.

They made Redfoot squawk the plank. She realized she was better off as a chicken than as a pirate. She didn’t like all the other chickens being afraid of her. She threw off her pirate attire and declared, “I am a chicken!” Then she tells the crew, “We’ve got a new mission, my friends.”

The others threw away their pirate clothes. They all moved to a deserted island and began their lives anew. But on the last page, the reader sees Lily poring over several books, making way for potential upcoming sequels about rockets, robotics, oceans, and space.

The story is simply some structure to advance the puns. Chickens being pirates is already a funny premise for a story, and the art makes it funnier. The speech bubbles add to the hilarity but might be more for the parents reading the story. One speech bubble says, “So that’s why they call it cold fusion.” Another bubble asks, “Where’s the poop deck?”

Bright colors on a white background helps the art pop. Only three pages have colored backgrounds. The chickens wear colorful tops or vests and doo-rags or bandanas. The end papers are bright yellow with white chickens with their red combs and wattles.

This book can be read over and over, because there is always something new to see in the art, and the puns are so punny. Parents will get a chuckle out of them, even if they are lost on the child. The title and jaunty cover art make this book a winner.