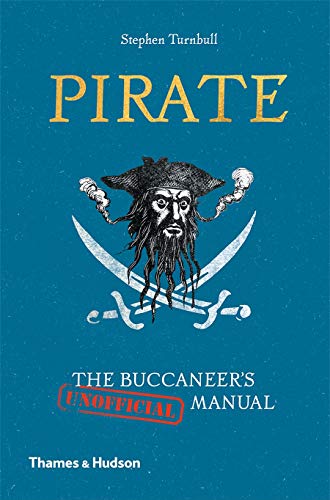 "Stephen Turnbull in Pirate teaches history with charm, fun, humor, and sarcasm. You will want to sign on board!"

Stephen Turnball offers in Pirate an entertaining but historically accurate guide to the vicissitudes of the lives of historical pirates. It purports to provide advice on "how to become a pirate and then how to live a long and successful life without ending up hanging by your neck from the yardarm." The fictional anonymous author, however, "lost one eye and one leg" before his murder.

Like any modern guide to a career, it begins with disclaimers "many pirates do end their brief careers by meeting the executioner" "to be hung, drawn and quartered." "There will always be someone somewhere in the world who regards you as a dastardly villain."

Why not just serve "with pride as sailors in the navy instead"? "Money---and lots of it." "It is a fact of life that when one person is trying to make an honest living, there will be another who wants to steal it from them."

"Perhaps you will get lucky and be captured by a dastardly gang," the pirate equivalent of getting recruited through LinkedIn. The skull and crossbones also draws recruits from "poverty and unemployment." "Many people turn to piracy out of sheer desperation."

Opportunities for advancement abound! "Pirates are a varied stock—men and women from all over the world have been drawn to the opportunity to make a living by tricking or intimidating more honest sailors out of their wealth." Twenty-five to thirty-five percent came from "African slaves who had escaped from their Spanish masters."

Historical background and traditional pirate hot spots naturally follows. By then, "your mind must be set on being a pirate." A potential terror of the seas must understand the culture. The author includes fashion advice on clothing and tattoos, important to a pirate's success; as well as "the considerate pirate's guide to the care and welfare of parrots." The next Henry Morgan could be you!

"Privateers and buccaneers claim that they are attacking and raiding on behalf of someone else, while as a pirate you will make no secret of the fact that you are out for yourself." Pirate includes biographies of the most famous of the profession, illustrating that room always exists at the top.

Naturally, "you will start at the bottom of the ladder—literally," however. The text then explains the corporate organization because "most of your days will be spent performing the menial duties that are yours by where you fit into the ship's company."

The book even includes "the reluctant pirate's guide to alternative maritime careers" such as smuggling (most "we're fishermen by trade, and considered too poor to pay fines") or salvage fraud. Pirate has a rich supply of modern metaphors, simple and complex, sarcasm, and inside jokes.

Other chapters cover food, maladies, rats, firearms, sinking, storms, swords, and finding the right ship ("a consumer's guide"). The author offers advice on preventing calamities ("sailors prefer not to sail on Fridays") and even "what to do when you think you see a mermaid."

Stephen Turnbull in Pirate teaches history with charm, fun, humor, and sarcasm. You will want to sign onboard! Heavily illustrated, Pirate includes a chronology and a list of suggested further reading. It would make a great gift.