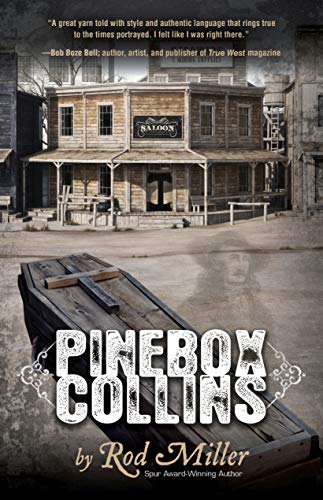 “Rod Miller’s skills and knowledge, combined with a natural storyteller’s knack, make Pinebox Collins both a great introduction to the genre and an enlightening addition to it.”

Ever wonder where all the bodies go in Westerns? In both novels and films, there seem to be a lot of shootouts, robberies, battles between cowboys and Native Americans or ranchers and miners—a seemingly endless list of people fighting and dying as the good guys put down the bad.

Usually the story gallops on to justice, leaving behind a bloody trail, and cleanup occurs offstage.

This is not to say the novel is specifically about the horrors of cleaning up carnage. Rather, it’s the story of a man whose occupation is “The Dismal Trade” during the settling of the US western frontier.

Jonathon “Pinebox” Collins is an itinerant undertaker, embalmer, and coffin builder who, like many of the men who wandered west, had been a soldier in the Civil War. He didn’t actually see combat because it came to him the morning of his first battle, when a cannonball blew off his lower leg while he was still in camp.

Thus, he’s a peg-leg, and between that and his occupation he’s a social pariah. So he learns to be a watcher, and in this novel he tells us what he sees and hears.

One of his repeat contacts is, of all people, Wild Bill Hickock, a notorious folk hero of the Wild West. He and Pinebox cross paths across years and territories and form an odd not-quite-friendship. This creates a refreshing biography of a historical figure.

It’s fiction, of course, so liberties are taken (as pointed out in the front-matter disclaimer), but this author knows his stuff and we can feel comfortable that the portrait of Hickock he draws is likely as good as scholarly studies, and might even be better because of its perspective into the man’s psyche.

Nevertheless, the story belongs to Pinebox, whose character and trade we also get to learn about through subtly sketched detail. His voice is laconic, erudite, wryly humorous, and feels true to the period. He salts his narrative with colorful one-liners, such as “Abilene had grown like a litter of pigs” and a saloon with “empty tables as rare as hair on a billiard ball.”

He’s also matter-of-fact about his missing appendage. The most we learn about it comes at the start of an early chapter:

“Many a night I awake from fitful sleep with a painful itch in my right foot. Sometimes, half-awake, I reach down to scratch . . . only then to realize—remember—the foot is not there. Strange as it may sound, in some odd way the foot is still there. My body imagines it to be where it belongs. Even more strange, its presence is required if I am to walk on my peg leg.”

He uses his woodworking skills to carve imaginative new peg legs as each gets damaged during his adventures. In a way, the chapters of his life can be measured by his custom limbs, which range from one shaped like the leg of a steer to a coiled diamondback rattlesnake to one he dubs a “dead man’s hand.”

As he and Wild Bill stitch their way across the country, we get an overview of the development of the postwar west: boomtowns arising around the railroads and mines, the miseries of traveling by stagecoach or driving cattle, and conflicts between drovers and settlers, lawmen and vigilantes, Mormons and most everyone else.

It’s all presented in a relaxed, steady style that melds what we think we know about the Old West with what it actually was like. Readers won’t be surprised to know that this author has won the Spur Award (an important literary honor from the Western Writers of America) several times. Nor that he also writes short stories, poetry, and nonfiction—all about the American West.

Rod Miller’s skills and knowledge, combined with a natural storyteller’s knack, make Pinebox Collins both a great introduction to the genre and an enlightening addition to it.