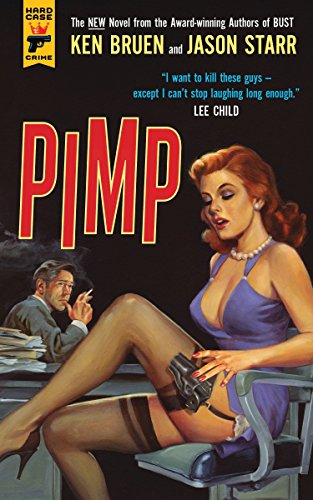 Ten years after their first critically-acclaimed collaboration, the duo of Ken Bruen and Jason Starr are back for a fourth adventure, Pimp, featuring the return of former drug kingpin Max Fisher, star of the previous three books Bust, Slide, and The Max.

Financially broke and on the run from the law and lawless, Max has fallen on tough times and is financially strapped. Instead of pulling moves worth zillions of dollars, he’s pulling pints in an Irish bar in Portland barely making the minimum wage.

Trying to blend better into his surroundings, he has had to grow a gray beard, dye it red, then add the fake “Oirish” accent. There were times he wondered if the escape from Attica prison had been worth it? And don’t get him started about the plastic surgery he had endured:

“The plastic surgery had hurt like a son of a bitch and only now was the bruising beginning to fade. What looked back at Max was like Philip Seymour Hoffman after the autopsy. Max, a master of self-delusion, saw a youngish Jack Nicholson, and gave the thumbs-up to the face, went, ‘Ya still got it, lid.’”

However, an opportunity soon shows its own face in the guise of Sage, a young long-haired hipster straight out of Breaking Bad with the looks of Kurt Cobain.

Unfortunately for Max, Sage has spent many a year of his young life in Ireland and quickly calls into question Max’s very dodgy Irish accent which only a Hollywood scribe could create. Being the diplomat, Max plans to handle this matter very delicately in the only way he knows: kicking the crap out of Sage in a warning not to blow his hard-earned cover.

The “kicking the crap out of him” doesn’t go according to plan and morphs into a farcical stumble-and-tumble wrestling match with no outright winners.

But Max is rewarded with a bag falling from Sage’s coat pocket housing a strange granular substance resembling kosher salt. It may just be the biggest discovery of his crooked life: a designer drug called PIMP (an acronym for peyote, insulin, mescaline, and psychosis). It might just put him back on top, where he used to be, instead of struggling like a common lowlife. New York, here he comes!

Angela, just like Max, is pursuing a comeback dream of her own: setting herself up in Hollywood as a producer of a series based on her and Max's life story. This may sound far-fetched, but an actual movie of Bust is firmly being talked about, and she wants to make sure she’s in full control of it.

But even in La-La Land, happy endings are hard to come by, especially with both the cops and your enemies in the drug trade coming after you.

Fast-paced, engrossingly entertaining, Pimp is outrageously funny. Bruen and Starr are in top form, and it is easy to see they are enjoying the ride as much as the reader will be. Pimp is totally addictive.