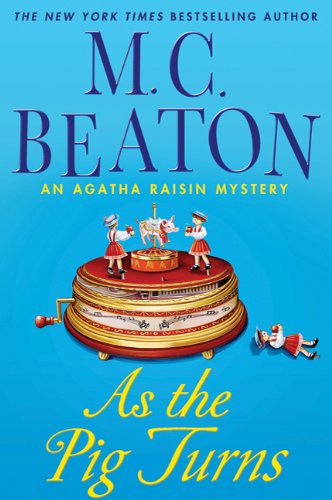 “Once you meet Agatha Raisin, you’ll keep coming back.”

M. C. Beaton’s Mrs. Agatha Raisin is not Agatha Christie’s Miss Jane Marple. She doesn’t knit or pretend to be slightly dotty to inspire confidences that unmask the killer.

Agatha smokes and drinks, is vain and jealous. Her hip aches, but getting it fixed means admitting her age. She prides herself on her good legs, shiny thick hair (helped by coloring), makeup, and nonsurgical face lifts to keep old age at bay.

But she does share important traits with Jane: She is smart and faithful to her friends—and both are easy for readers to love. Agatha is ashamed of her background—from the Birmingham slums—but her rise to successful public relations maven makes her cranky belligerence easier to bear.

She has long ago left the London rat race to settle in Carsley, a beautiful village in the English countryside. Never content, always longing for something else, a plan that has served her well in business, (her love life never runs smoothly, but she doesn’t want to examine that closely), and after she solves several village mysteries, the smart businesswoman within decides she should get paid for her talents.

Agatha sets up a detective shop, with a small staff, handling teenage runaways, divorces, and during this recession, may have to return to finding missing pets.

Bored and irritable with the terrible winter weather, she plans an outing to a pig roast in a nearby village. She asks her beautiful assistant Toni to come, and she brings her older boyfriend. When they reach the spit, the fog lifts for a moment. Agatha screams, then she explains: “Pigs don’t have tattoos.”

Toni’s relationship with Agatha is complicated; Agatha has seen her potential and given her increasingly more responsibility and interesting cases, and Toni is grateful. But Agatha also interferes with Toni’s love life, going so far as to pay off a former beau because he wasn’t good enough for Toni. Even if Agatha is right, (and this new one doesn’t pass the smell test either) it is Toni, not Agatha, who should be allowed to figure that out.

One place where Ms. Beaton and Christie differ is in plot. Dazzlingly intricate puzzles are not a part of Agatha Raisin mysteries. Agatha careens from port to starboard, trying to fit what she does know into what she needs to find out. This gives the reader a chance to meet old friends in the series, Mrs. Bloxby, the vicar’s wife, James Lacey, whom Agatha loved for many years until they married, then quickly divorced. Bill Wong, village copper, Roy Silver, Agatha’s mentee from the London days, and Sir Charles Fraith, the parsimonious, on-again, off-again beau who keeps coming back to Agatha.

Sir Charles is onto something: Once you meet Agatha Raisin, you’ll keep coming back as well.