Pig: King of the Southern Table 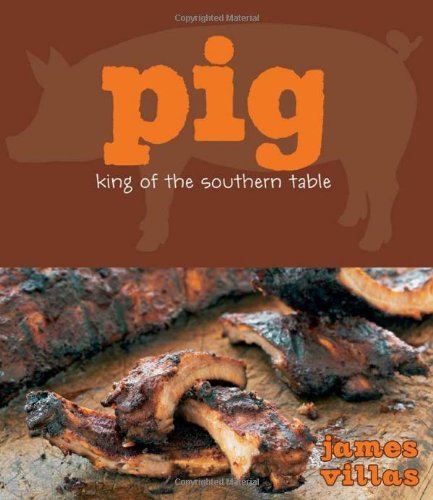 We can only hope that the bacon craze, now a bit revolting in its ever-so-American excesses, has passed its peak. Left standing after it’s gone, though, should be James Villas’ tribute to classic Southern pork recipes in Pig. Villas, who has written other books on Southern food traditions, provides straightforward recipes that will have readers dog-earing many pages.

Reader warning: If the mere mention of lard sets you to shaking, don’t buy this book. Villas gives recipes for lean pork chops and tenderloin, but the recipes give more love to bacon, sausage, pork butt, shoulder, and ham. And the sausage is one you make yourself, using a pound of pork fat to two pounds of butt.

Inexperienced bakers should skip the bread chapter, as these aren’t Villas’ best recipes. Unless bakers can understand in advance where to make adjustments, they’re bound to be disappointed. A recipe for yeast rolls flavored with bacon and herbs produced bread on the dry side without strong flavor. The roll dough went on top of poppy seeds, which were sprinkled into muffin tins, but when the rolls were turned out, too many of the seeds stayed behind.

A recipe for pimento cheese bread with bacon called for making a roux, adding milk, and cooking until thick and smooth. The recipe says this takes ten minutes, but two minutes was plenty. And step one calls for bacon to be cooked and crumbled, but the bacon never appears again (in a recipe test, it was added at the end of kneading). Otherwise, the bread turned out fairly well, and with a few tweaks, such as more bacon and pimentos, could be quite good.

Bacon-wrapped meat loaf, on the other hand, needed nearly no tweaking to be rich and fabulous. The loaf, made with half beef chuck and half pork, was well-seasoned and smooth, covered in crisp strips of bacon. A spicy sausage and vegetable pie, made with corn and tomatoes and using Villas’ homemade sausage recipe, added up to more than the sum of its ingredients, especially when made ahead and reheated. In a test, using crisp panko for the breadcrumb topping, the crustless pie delivered full flavor and crunch with little effort.

Villas’ bulk sausage recipe is simple and classic, and it should make any sausage novice feel at ease. The sausage made with pork, bacon, and fennel seeds from the Blue Ridge mountains also turned out well, though it needs a more aggressive hand with seasoning.

That’s a problem with many of Villas’ recipes: They’re often underseasoned. His cream gravy, for example, needs a very healthy dose of pepper, and the accompanying biscuits, made with shortening and milk rather than at least some butter and/or buttermilk, are extremely bland.

Additionally, while Villas clearly doesn’t assume his readers are complete novices at the stove, he also doesn’t think they’re experienced at such recipes as homemade sausage. Given that, why write “salt and pepper to taste” in recipes that a cook cannot taste until the recipe is finished, such as the bacon meatloaf? For sausage, a cook should season it, then fry a small bit to test the seasoning—but not only does Villas not suggest that in the Blue Ridge recipe, he doesn’t even give a starting point, such as “1 teaspoon salt, or more to taste.”

Readers may also wish Villas would make use of a thermometer in some recipes. Both the meatloaf and a pork butt roast, for example, can be tricky to judge by look, feel, or timing; a temperature check would make even experienced cooks feel better about taking the food out of the oven. When cooked just right, though, the roast, with a pan gravy, makes a wonderfully simple and flavorful meal (and, granted, a pork butt does give a cook good leeway before it’s truly overcooked—it’s more important to be sure to roast until it’s quite tender).

Many of the recipes are equally simple. From gumbo to Cajun spareribs to sausage and grits pie, pork lends itself to easy preparations, and with careful seasoning, these recipes will point cooks toward much of the best of Southern pig.