Pierre Bonnard: The Colour of Memory 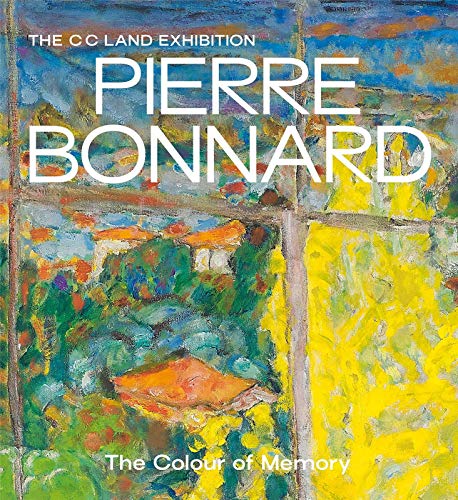 Working backward from snippets of memories vaguely and randomly recalled, revealing both an artistic process and a tauntingly in/comprehensible edgy product, Pierre Bonnard (1867–1947) stubbornly painted his own ways and means. Pierre Bonnard: The Colour of Memory curates Bonnard’s methods and motifs into an exhibition catalog that reflects his inner turmoil, his outer disposition, and his attempts to establish his artwork as a fixture in 20th century French art history.

Fascinatingly controversial, the debate raged not over his ideology, philosophy, lifestyle, religion, or politics, but rather over whether or not Bonnard could actually paint. Critics made comments that oscillated along the gamut: “mediocre originality,” “vital creative powers,” “leftover Impressionism,” “a rare and courageous painter,” “a potpourri of indecision,” “luxury entertainment,” “a little niche of pure naive sensation,” “painful, distasteful, distressing,”  “novel and surprising.” If polemics are any indication of caliber, no wonder he is a master, although no one can quite pinpoint why.

The fabulous appendix For and Against Bonnard is juicy, exposing Bonnard to opinions that drag him across the decades, bat him back and forth across centuries like a good, exiting tennis volley that has the spectator holding their breath in anticipation of the final fault. Where will this end? Who knows, because the discussion today is still raging on. Is Bonnard an Impressionist? No way. Is he a Fauvist? Far from it. Is he Cubist? Expressionist? Classical? (gasp!) Oh, how art historians long to dissect his thoughts and smash them into a category and win the debate once and for all. Why is it so hard to admit that he, like his contemporaries Picasso and Matisse, was charting his own course, misunderstood and mysterious as it was.

Essays in the catalog are pleasantly varied. One explains the artistic and political contexts of the late 20th century European world in which Bonnard lived and how these contexts are expressed in his paintings. One touches Bonnard’s key formational biographic events and artistic influences from Gaugin, Manet, Degas, Picasso, Renoir, Seurat, Vermeer, and particularly Hokusai. One discusses Bonnard’s emotional fortitude after WWI.

Two spectacular articles come first from Line Clausen Pedersen who had the dream task of drilling down into a singular painting, in this case The Dining Room, Vernon (1925). This painting quickly emerges to become the quintessential example of Bonnard’s genius in thought and execution. It is in this explanation that the reader finally catches on to what the other writers have only been hinting at: “The process of painting for Bonnard is less obvious than meets the eye.”

His process was anything but typical and consisted of “surfaces within the surface, areas painted and placed one after another across the canvas, with no apparent intention to uphold any sort of coherent narrative.” This process, applied to both technique and content, held varying levels of meaning and depth. The viewer really has no idea what’s going on.

Although a table, a window, a bowl of fruit, a pitcher of water and two female figures are identifiable enough, what is painted is more effectively a gradual, rhythmic reveal of a flash of a memory, one of Bonnard’s memories at that, which had nothing whatsoever to do with the viewer. He remembers movements, colors and sensations and these are the things he painted. Indeed, these are the things one first sees only to find the more mundane objects after the eyes have adjusted.

The second writing of note by Juliette Rizzi covers Bonnard’s use of sketch diaries and photography in his daily ritual and, presumably, his artistic process. Rizzi makes an interesting connection suggesting that Bonnard used diaries the same way he used a camera and that he actually considered the sketches superior as a memory aid with fewer limitations and constraints. Photography, after all, was a novelty in the late 1890s and the Pocket Kodak was only just invented in 1895.

Getting caught up in the writings, do not forget that the primary purpose of this publication is to document the exhibition of Bonnard’s paintings. The generous presentation of nearly 100 paintings with a handful of sculptures, drawings, and photographs tucked in, depending on whether one sees the exhibition at the Tate Modern in London or the Ny Carlsberg Glyptotek in Copenhagen, are reproduced in full color.

In a few instances, such as with Landscape at Le Cannet (1928), the designers have mercifully made up for the fact that most people will not have the benefit of viewing the painting in person but instead are forced to experience the four by nine foot painting in a sadly diminutive and cramped reduction of less than four by nine inches (curiously relegated to the bottom right third on of an otherwise stark white full page spread) and have graciously enlarged a detail portion of the painting to unleash the vibrato of brushwork that is so captivatingly and uniquely Bonnard.

It is on pages like this and the detail reproductions of other paintings across his oeuvre from Summer (1917) to The Studio with Mimosa (1946) that viewers can bear witness to the subtle shifts of “surfaces within the surface” as Bonnard’s painting becomes a more developed, even if still mystifying, enigma.

Bonnard as an artist may have been working backward in reconstructing pictorial memories, but Pierre Bonnard: The Colour of Memory defends Bonnard’s surprising historical significance, pushing him forward from the traditional French art history shelf onward to our present and evolving modern art consciousness.