Picasso's Demoiselles: The Untold Origins of a Modern Masterpiece 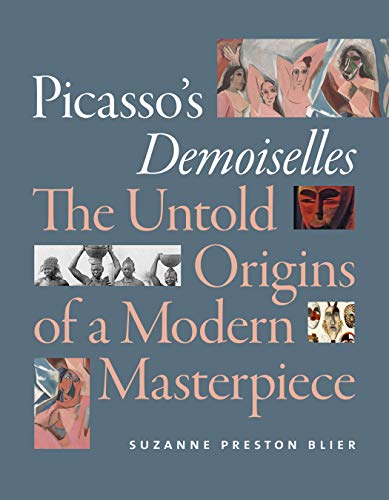 One thing Pablo Picasso (1881–1973) did very well over the course of his abundant artistic career was to create mystery by leaving a puzzling trail of bread crumb clues. It’s as if he knew that curious people like Blier would be compelled to sleuth around, gathering them up bit by bit a century later, and he wanted to give them something juicy to discover. One thing Blier did very well was to collect this splattering of crumbs and present her findings in a very academic manner.

All of the clues of interest surround one painting from 1907, Les Demoiselles d’Avignon. With its large 8 x 7.8 foot dimensions, its impressive aggressiveness, and its storied response of rejection, the viewer is justified in asking, like one would with almost any Picasso painting, “What the heck was he thinking?” Professor of Fine Arts and of African and African American Studies at Harvard University, Blier chose to ask the same question. Which must have opened up a deep and wriggly can, no cauldron, of worms so intriguing, so tantalizing, she could not ignore them.

With her expertise in African art, Blier saw herself positioned in such a way as to make a legitimate statement on this painting and take a stab at offering up an answer as to what Picasso was actually thinking. There is, quite frankly, no easy answer. Instead, as any good art history professor must admit, there is a combination of answers depending on the angle of inquiry.

That question could be broken out much further into dozens of more specific lines: What was Picasso thinking . . . about women? What was Picasso thinking  . . . about the origins of art and art history? What was he thinking about French colonialism? What about his views on his rival Matisse and the other avant-garde artists? What about current cultural and political events? What about his sense of humor, where does that play in? What was he afraid of, striving for, communicating, etc.

It is in addressing all of these dimensions that Blier translates for us what Picasso has each of these five demoiselles saying. What they say and how they say it changed the world of painting. These ladies come together with deliberate intention and seem almost incredulous and disgusted that we cannot immediately understand them (of course they are, they were Parisians after all).

As it stands, “the canvas follows multiple paths toward signification. It transports complex, sometimes competing and contradictory messages that individually and together enrich the canvas in important and unexpected ways.” Blier titles the result Picasso’s creative nexus. He hit upon hot topics, controversial then and cringe-worthy today. Picasso took his liking for multivalent plays on words and extended it into his Les Demoiselles. He mingled idea upon idea within a painting that makes a statement about them all. This is the very culmination of his thoughts and he pulls off the apex achievement of his particular artistic and philosophical talents.

But Picasso did not really pull it off, at least not immediately. At the time, in 1907, it was more of a much-ado-about-nothing, and the canvas sat rolled up in his studio, severely misunderstood. It was not exhibited until 1916. The Museum of Modern Art did not acquire it until 1939. This lifecycle seems fitting for all of the great works of art, initially ridiculed mercilessly into ostracization only to make the critics eat their words when they are catapulted into fame and marked as pivotal, seminal works of genius.

In working along through the chapters it is obvious that Blier’s voice is that of an academic, writing for other academics. If it weren’t for the mesmerizing challenge set before us of comprehending Picasso and his mysterious creation, Blier’s style would be dense and slow-going, at times redundant as she tries to make sure we are still following her line of reasoning. She dutifully follows the predictable perfect paragraph format. For readers interested in the main ideas, the final chapter is all that is needed. For those wanting evidence, each chapter digs and digs and digs, becoming more of a defensive battle to prove her case as if she had a reputation and a tenure to defend as well as the claims about the painting.

With so much impressive scholarship packed in, one less than impressive letdown is the decision to use black and white images. Blier makes multiple references to the importance of color, and details again and again its usage, yet the impact is lost on the poor image quality of the black and white reproductions. With over 300 images included, this is definitely detracting from the efficacy of her arguments. She acknowledges this downside and encourages the reader to find the images on the Internet, but with so much flipping around from page to page already underway, a trip to the computer disrupts the flow and feels removed and unprofessional.

What is most welcomed about Blier’s discussion is that she does not harp on feminist or misogynist theories. She considers them simply as one of many competing attributes. Priority is given instead to Picasso’s interest in African roots and existential philosophical debates. Of course, in the end, it is Picasso’s unparalleled instinct to innovate that wins us over. Picasso's Demoiselles is a thoughtful, meticulously researched investigation into the artist’s extensive creative process.