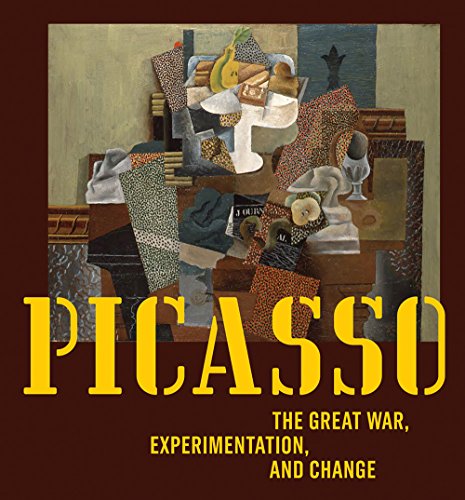 In 1900 when Pablo Picasso first traveled from Spain to Paris, he was 19 years old and Paris was the art capital of Europe. He was entralled and relocated to Paris in 1904. By 1907, at the age of 26, he had painted several notable works including the Family of Saltimbanques (1905), the Portrait of Gertrude Stein (1906), and Les Desmoiselles D’Avignon (1907).

During the period from 1909 to 1914, Picasso went on to develop cubism with Georges Braque and explore collage. But the period from 1912 to 1924—which is covered in the book, Picasso: The Great War, Experimentation, and Change—encompasses the time preceding and immediately following World War I.

This was a tumultuous period for Picasso for several reasons: He saw his relationships with his art dealer and friends either severely disrupted or end as a result of World War I and increased French nationalism; there was less appreciation for cubism in the art market, hence greater financial stresses; he experienced the death of his lover Eva Gouel in 1915, (whom he immortalized in his paintings with the phrase “Ma Jolie”—my pretty one); he ventured into a new area of work in creating theater production and costume designs for Cocteau’s ballet Parade; and he married Olga Khokhlova in 1918, which was short lived in happiness and led to great animosity and lifelong separation.

The authors, Simonetta Fraquelli and Elizabeth Cowling, provide clear insight into Picasso’s seemingly abrupt reversion to naturalism in 1914, and his continued furtherance of cubism although in an altered form, from 1915 to 1918. The fact that he did not relinquish either one, and that each stylistic form enriched the other in his varied approach is demonstrated in his works such as the naturalistic and unfinished painting, Painter and His Model (1914); the linear delicacy of his representational drawing, Portrait of Léonce Rosenberg (1915); and the cubist influenced abstraction, Harlequin (late 1915, oil on canvas).

Picasso: The Great War, Experimentation, and Change is a wide-ranging book that covers a vast amount of information on Picasso’s life, artistic styles, and prolific output as directly evolving from, and related to, his relationships with his friends, art dealer, amorous affairs, and the increasingly nationalistic day-to-day environment of Paris during World War I. Picasso was, after all, a Spaniard in an adopted country, a citizen of Spain living in a foreign country that was at war. And he was also an avowed pacifist whose anti-war activism was relegated to his art as shown in his paintings Guernica and The Charnel House.

It also includes a selection of artworks by Picasso’s contemporaries in Paris such as Juan Gris, Albert Gleizes, Jacques Lipchitz, Amadeo Modigliani, Diego Rivera, and others. The book also features detailed catalogue notes by art scholar Ann Bremner for each piece shown, a chronology of 1907 to 1924, and robust footnotes that add a great deal of social and historical context.

Picasso: The Great War, Experimentation, and Change is a treasure trove of insight on the artist, and an excellent addition to any art library that values the work of Picasso.