Picasso and Rivera: Conversations Across Time 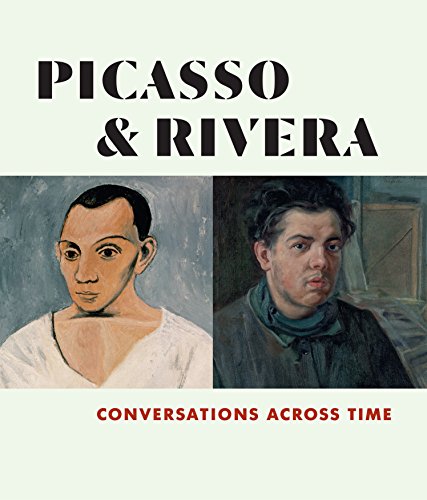 “an extraordinary examination of parallel paths of two phenomenal artists, their work, and their seminal effect, which extends to the present day.”

Picasso and Rivera: Conversations Across Time is a fascinating expert examination of the careers, art, and connections between two of the most towering figures in 20th century art. Their friendship began with a meeting in Paris, early in 1914, when Rivera and a mutual friend visited Picasso in his studio.

Although Pablo Picasso was five years older than Diego Rivera both had similar educations in their respective national academies in Spain and Mexico. Both were trained from an early age in painting styles deeply rooted in the classical tradition, and both rebelled against this training. And yet despite radical stylistic transformations throughout their lifetimes and as active members of the avant-garde in early 20th century Paris, they remained committed to the idea that ancient art could actively enrich their current work.

In the early 20th century both Picasso and Rivera thoroughly explored cubist abstraction. Progressively, both Picasso’s and Rivera’s simplified forms echo the representations of the past in their work. Picasso referenced the dimensionality of classical Greek sculpture, as in his paintings Three Women at the Spring (1921) and Woman by the Sea (1922); and Rivera stylistically referenced ancient Aztec art, as in his painting Flower Day (1925).

In many ways Rivera embraced the more challenging path by assimilating and re-interpreting elements of Aztec art that was not highly esteemed by Europeans in 1910.

As Diana Magaloni states in the book, “What distinguishes Rivera’s painting, however, is that in merging the past and present, the classical and the vernacular, the artist drew on a culture and history that did not then have a predominant place in either art history or modern art. At the time, the status of Aztec art was not remotely comparable to that of Greek art . . . Spanish conquistadors had condemned works of art from Pre-Colombian Mexico as abominable products of the devil, while in the 18th and 19th these [Aztec] works were seen as admirable but incomprehensible products of a ‘savage’ ancient civilization . . .”

Diego Rivera lived for 14 years in Europe, initially in Madrid, then Paris. While there he married Angelina Beloff, fathered a son, lost a son, made important contributions to Cubism and Post-impressionism, explored socialism, and returned to Mexico in 1921 to a nation still undergoing the aftermath of the tumultuous Mexican Revolution.

He later recalled, “My homecoming produced an aesthetic exhilaration which it is impossible to describe. It was as if I were being born anew . . .” It is reasonable to conclude that when he compared his past experiences to his rediscovered homeland it inevitably drew him to recognize his place in the world and fully embrace his native culture. In some ways it was also a repudiation of European influence as well as their colonial incursions into Mexico.

In contrast Picasso was more inclined to embrace the classical artistic heritage (signified by his move to Paris in 1904, and living out the rest of his life in France) because it more fully reflected his European culture. And as a Spanish foreign national living in the politically charged, xenophobic environment of Paris during World War I, the culture prevailed upon him to assimilate. Both artists embraced their respective cultural pasts, albeit in different ways.

One such example of individual yet parallel fascination is Picasso’s intense exploration of Ovid’s Metamorphoses and Rivera’s lavish illustrations of the Popol Vuh, the ancient K’iche’ Maya creation myth, both in the 1930s.

The book’s many essays by curators, historians, and museum directors also delve into Picasso’s communist and anarchistic politics and Rivera’s socialist philosophy, and how they are reflected in their work. Anarchist ideology—which affirms an end to a centralized government, army and judiciary, in favor of a decentralized direct democracy—was an integral element in how Picasso and Rivera both viewed their place in society and their approach to creating art, as leaders not followers.

The book contains many insightful essays including, “Picasso and the Simultaneity of Time” by Michael Govan, of the Los Angeles County Museum of Art; “Diego Rivera and Coatlicue: Toward a Mestizo History of American Modernity” by Diana Magaloni; and “Torn Bodies for Pleasure: Classicism and Monstrosity in Picasso’s Illustrations of Ovid’s Metamorphoses,” among many notable others.

Picasso and Rivera, Conversations Across Time is an extraordinary examination of parallel paths of two phenomenal artists, their work, and their seminal effect, which extends to the present day.

The book is published by Prestel in conjunction with the exhibition Picasso and Rivera: Conversations Across Time, organized by the Los Angeles County Museum of Art and the Museo Del Palacio de Bellas Artes in Mexico. Although the 10.3 x 11.9 inch book is superbly printed and written with scholarly sophistication the only disappointing aspect of the book is that the majority of its images are printed approximately 5 x 4 inches or smaller. Few are printed to full-page size. Such small reproduction of detailed etchings and paintings is often inadequate, especially in view of the fact that a good portion of the impact of the book is based on visual art.