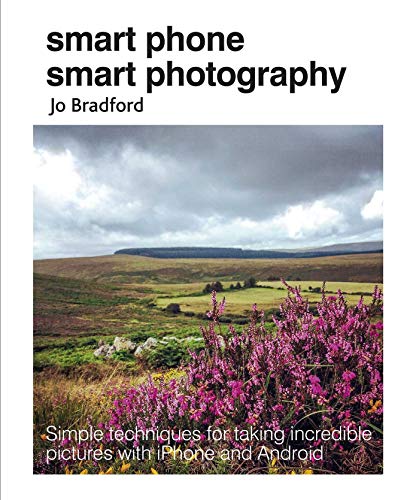 “Bradford’s lessons are easily applied to Android and iPhone photography.”

Smart Phone Smart Photography by Jo Bradford is an inspiring, content rich book for novices, an informative how-to for those who never imagined that they would be able to use their smartphones to create outstanding photos, as well as those who wanted to push their photography further.

As smartphones have become more technologically advanced many have begun neglecting their DSLRs and using these marvelous devices that are always with them to take pictures—their phones. But these same users have also struggled with how to fully exploit the enormous potential of their smartphone cameras.

While this is especially true for iPhone users, whose cameras have traditionally lagged behind their Android counterparts (with issues such as megapixel size, RAW formats, or being able to actively choose an ISO), it also applies to the many who have sought solutions to the same struggles by attaching tiny auxiliary lenses, or using apps that simulated “film looks” and slower shutter speeds.

Smart Phone Smart Photography is abundantly illustrated with many examples that address these challenges. It is a potent teaching tool that covers many traditional photographic techniques, such as the Rule of Thirds for composition, the principles of Color Balance, the Exposure Triangle, the difference between focus points, exposure, ISO, and dynamic range, and much more. It is written in a way that is easy to understand.

In some cases the examples are part of a step-by-step lesson, in others they are illustrations of a specific technique. Jo Bradford’s lessons are effortlessly applied to both Androids and iPhones, and in certain cases she addresses how to access specific functions on each of those.

Her solid foundation as a photographer comes across when she explains techniques such as nighttime shooting, depth-of-field, shooting at the Golden Hour, Low-key or High-key portraits, still-lifes, photographing pets, or dealing with various weather conditions.

Bradford spends time discussing why it’s a bad idea to “zoom-in” digitally on smartphones (it degrades image quality), the advantages of apps that generate RAW files; and for those who desire to post-process their images by using Snapseed, there are a couple of outstanding, brief but clear, case studies; as well as apps such as VSCO film simulations, and SKRWT perspective corrections.

There are detailed explanations of file types, formats, compression, resolutions, and other terms useful to beginners. And she also includes a list of her own gear, such as Joby Gorilla tripods, Olloclip lenses, etc., and the workflow process from capture to print.

Bradford’s photos populate the book’s interior—kudos! Well done. Beautiful landscapes and a variety of pet-to-portrait themes and images. The cover shot of trees in mist is also beautifully reproduced on page 91, as are the rest of them on semi-matte paper.

Sadly, the one thing that is very unattractive about the book is the text layout. It smacks of an over-eager website designer wildly jumbling too many fonts while struggling to make the transition from web to printed book, all too often making the reading of text a laborious chore.