Phil Jackson: Lord of the Rings 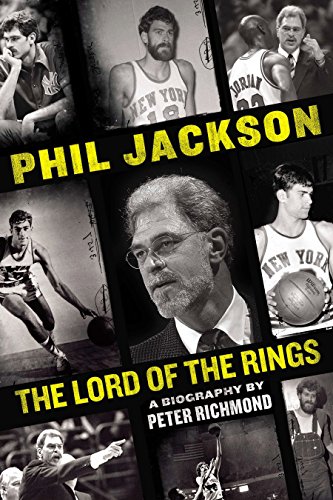 “There’s nothing wrong with the book—it is well-written, well-researched, and entertaining. But if your goal is to know Zen Master Jackson on a deeper level you’ll have to wait for Phil’s own next book.”

Lord of the Rings by Peter Richmond is an intensely readable, thoroughly engaging, and thought-provoking life of Phil Jackson, the most successful coach in NBA history.

Now let’s ask a bigger question: Why exactly was this book written and what purpose does it serve?

Phil Jackson is indeed the most successful coach in NBA history, having won eleven rings—six with Michael Jordan and Scotty Pippin in Chicago and five with the L.A. Lakers. His basketball odyssey began in the plains of North Dakota, where his parents were fundamentalist Christian ministers. He rejected conventional religion, began a lifelong investigation into the spirituality of the Lakota Sioux, and was drafted into the NBA to play for team-oriented New York Knicks coach Red Holzman.

With the Knicks, Jackson won two rings, and took what Holzman taught him about the open man to the continental basketball association, where he won a ring with the Albany Patroons. There he also did crossword puzzles while driving the team bus with his elbows and listening to the Grateful Dead.

Jackson’s elbows may have been the sharpest part of his game. He was the go-to guy on the Knicks if you needed somebody flattened. Somehow Jackson’s spirituality has always allowed for sharp elbows. According to Richmond, Jackson has elbowed out of the way anyone he no longer needs. These unfortunates include Charley Rosen, a best friend; June, a wife; and even Laker legend Jerry West, the general manager whom he banished from the Laker locker room in order to stake out his territory when he became Laker coach.

The questions that has dogged Phil’s career are whether he could have won championships without the caliber of players on his teams—Jordan, Pippin, Shaq, and Kobe—and also whether he could have won with lesser players. Since he was denied the Lakers job in 2013 because of the suffocatingly large ego of Laker (thanks dad) owner, Jim Buss, the rare man with an ego bigger than Phil’s, we’ll never know.

The reality is that other coaches have had those same pieces and were unable to get them to share the ball and win. Phil did. In the hyper-competitive NBA, Phil truly is the most successful coach, and he might have won even more rings had Jordan not taken his baseball walkabout, perhaps due to Richmond intimates, and to the accusations surrounding Jordan and gambling.

The problem with the book is that pretty much everything in it has been said elsewhere—and many times. Unusually for a sports book, Richmond’s most frequent sources are other books written about Jackson, including Jackson’s own books. Richmond was a reporter covering Jackson and got to interview him numerous times while Jackson was still coaching, but not for the book. So you have to ask: What good is a book that simply restates everything we already know?

Or as my Philosophy 11 professor at college, William Kendrick, would have asked, “What is a book for?” Ideally, a book doesn’t simply recount well-told tales. It breaks new ground. It offers a level of insight into its subjects unavailable elsewhere, due to intrepid reporting, questioning of the subject by the author, or a brilliant new evaluation of the subject’s life, in light of all available data.

This book is fun to read, but it doesn’t do any of those things, which begs the question of who its audience is. If you like the NBA and you follow sports, you already know all this stuff. If you’re not a big NBA fan, it’s not likely that you’re going to take time that you could’ve spent on Facebook and Pinterest and read a biography of Phil Jackson. So who is in the narrow band of people who really like the NBA but really don’t know all that much about Phil Jackson and are willing to invest time and money in a hardcover tutorial?

It’s true that the author suffered from his inability to interview Jackson for the book. He was told, and we are told, that Jackson wouldn’t speak to him out of a churlish desire to keep whatever nuggets of self-awareness he had mined for his own next book. Whatever. The point is that while Solomon’s dictum that there is nothing new under the sun is debatable, there’s practically nothing new about Phil Jackson in a full-length book about Phil Jackson. So what’s the point?

The problem with publishing—okay, one of the many problems with publishing today—is that “market research” consists of an editor sitting in an office somewhere and saying to himself, “Maybe somebody will buy that book.” Maybe they will. The problem for publishing, unfortunately, is that most likely they won’t. If you’re a regular Joe or Jane, your inclination will probably be to find a book that tells you a story you don’t already know.

There’s nothing wrong with the book—it is well written, well researched, and entertaining. But if your goal is to know Zen Master Jackson on a deeper level you’ll have to wait for Phil’s own next book.