Pharaohs of the Sun: The Rise and Fall of Tutankhamun's Dynasty 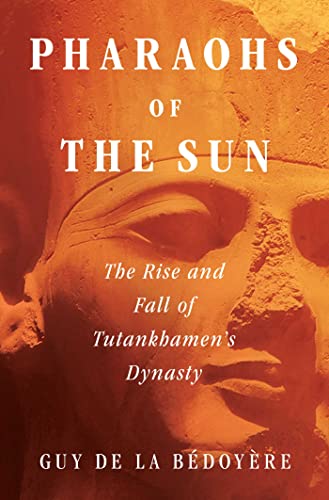 “Ancient Egypt produced a continuous stream of tales of intrigue, murder, power, religion, etc. within a culture incompatible with ours . . .”

“There can be no other civilization that is so instantly recognizable to modern eyes as that of the Egyptians,” writes author Guy De La Bédoyère. One of the first civilizations, this “Kemet” (Egypt) lasted for over 3,000 years.

The Egyptians celebrated their great events with monuments “as perpetual and essential truths,” but they did not have written history as we would understand it. Ancient Egypt produced a continuous stream of tales of intrigue, murder, power, religion, etc. within a culture incompatible with ours, however.

One story stands out among the many otherwise overlooked tales, that of Tutankhamun and the discovery of his treasure-laden tomb on November 26, 1922. This boy king would serve as the gateway to the history of the New Kingdom and his remarkable family. Egyptologists try to fill the gaps in our understanding of the power politics in his family with informed speculations.

Prominent writer on Ancient Rome and Roman Britain Guy De La Bédoyère, in Pharaohs of the Sun, takes the challenge of adding still more to our understanding of a remarkable era. The author begins by explaining how the author’s interest began, as with many of the readers, only as a fan.

Pharaohs of the Sun covers the 18th Dynasty from the reign of Ahmose I (1550 to 1504 BCE) to Pharaoh Horemheb (1323 to 1295 BCE), with insights on archaeology. This book can be read as a chronological narrative or as specific essays on different parts of what has steadily expanded as archaeology’s most popular mystery.

The author warns, however, “Egypt provides just enough historical evidence to form a chronological outline.” “The nature of the evidence is often tenuous and cryptic.” Throughout Pharaohs of the Sun, Bédoyère must use phrases such as “but is also possible,” “make a good case for,” “there is no means of proving that,” etc.  New discoveries could answer some questions but will raise others.

Only starting in 664 BCE can events and people be “affixed to absolute dates, that precision is possible.” Even the identities of the predecessors and successors of Tutankhamun raise questions because of an attempt to erase that history. Priest Manetho’s famous but problematic list of pharaohs (200s BCE in Greek) contains mistakes for that era but exactly which errors?

Understanding this world is difficult. Of hieroglyphics, “some words are still not fully understood, and many can be translated several different ways.” “Modern Egyptology throws up endless variant spellings and names forms.” Bédoyère refers to Akhenaten’s capital as both Akhet-aten and as Amarna.

This work is an enthusiast’s dream. The prose is clear and concise with a well-organized narrative. Each chapter begins with a short summary and has sidebar essays. Pharaohs of the Sun has appendices on reading Ancient Egyptian, a timeline of events, a list of the 18th Dynasty monarchs, Manetho’s enigmatic list of 18th Dynasty rulers, a glossary of principal personalities (excluding Pharaohs), a glossary of places, a glossary of terms, notes, a list of abbreviations, and suggestions for further reading.

This work ends appropriately with information on the illustrations. Throughout the book, Bédoyère

not only tells the history but explores what the surviving images teach us, as well as the related archaeology and varying interpretations. The book has color illustrations and maps.

Pharaohs of the Sun begins with the Second Intermediate Period when the mysterious Asian Hyksos invaded and brought down Egypt’s great classic period of the Middle Kingdom. The Hyksos with their iron weapons and chariots were finally driven out and Pharaoh Ahmose I reunited Egypt.

Subsequent pharaohs created armies that led to conquests and plunder. They created an empire to the south and also across the Middle East but royal succession had crises. The consequences remain debated mysteries, such as Bédoyère’s essay on the reign of the female co-Pharaoh Hatshepsut.

Items found in Tutankhamun’s tomb, as the author points out, amaze us not just because of the background story and the immense treasure buried with a minor pharaoh. “The ephemera has more power to humble us: the reed that Tutankhamun cut one day to serve as a [walking] stick, or the golden throne battered by his infant feet.”

Tutankhamun became a child pharaoh between the radical changes begun by his predecessor Akhenaten and the controversial ascension of his successors Ay and General Horemheb. In essays on such fascinating rulers of the New Kingdom, Bédoyère gives us special ideas to consider in this epic, otherworldly saga.

The author discusses such aspects of Ancient Egypt as the complete control by the state by making its creation story government, life itself, and religion. “There was no professional judiciary or [an] independent judicial system.” Slaves could rise to important positions in Egypt. The Egyptians had a version of pi and an army like and unlike that if Rome. The lengthy essay on the campaigns of the great warrior pharaoh Thutmose even discusses elephant hunting in ancient Syria!