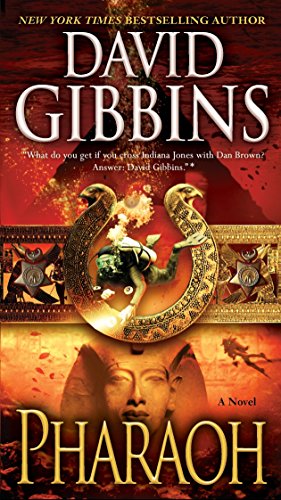 “Pharaoh is a mystery for all the wrong reasons.”

What the publisher says about the book is this:

1334 BCE: Akhenaten the Sun-Pharaoh rules supreme in Egypt. The young Tutankhamun is groomed to be his successor. But then Akhenaten disappears and his legacy is seemingly swallowed up by the sands that lie under modern Cairo and the great pyramids of Giza . . .

ACE 1885: A half-crazed man appears claiming to know of a vast lost labyrinth beneath modern Cairo, of canals and palaces and tombs. His story won't be believed for almost 30 years, with the discovery of Tutankhamun's tomb in 1924.

Present day: Jack Howard and his team are excavating one of the most amazing underwater sites they have ever encountered. They hear the story of the crazed engineer. What follows is a rollercoaster ride of adventure and action, as they dive into the Nile into a world three thousand years back in history, inhabited by a people who have sworn to guard the greatest secret of all time. . . .

If only. Anyone who has read previous books by Dr. Gibbins will be left wondering what has gone wrong. The title of the book—and indeed the blurb—suggests a story very much about a pharaoh and amazing underwater encounters. The reality is quite different.

Yes the pharaoh Akhenaten does make an early appearance in a rather confused scene with Nile crocodiles and unwanted priests, and he comes in a for a mention here and there throughout the book, but his role is no more than an adhesive to try to keep the other tenuous elements of the narrative from unravelling altogether.

Only after wading knee-deep through the 400 pages does it become clear that the reader has been sold a teaser for the follow-up novel, leaving the book in hand without a satisfactory conclusion. This may work from a sales point of view—assuming readers are willing to dish out yet more money to learn about the pharaoh—but surely in a novel of this length from an illustrious archaeologist and author the public can expect something more?

If there is a story in Pharaoh, it is about British soldiers in the desert. Great swaths of text as expansive and seemingly endless as the sands themselves provide a surfeit of detail including—but not limited to—weaponry, war, and camel handling. There is more information about the waste products of the camel’s digestive system than about the ancient Egyptians.

Joining the pharaoh in not making much of an appearance are the Nile crocodiles, and since the entire “plot” relies on the leviathan it beggars belief. Even as the intrepid hero Jack Howard and his trusty sidekick Costas contemplate diving in the treacherous waters, the reader anticipates a much needed fillip.

The crocs, however, have gone on vacation. Not one encounter with a live set of jaws while diving in the Nile? Suspension of disbelief sinks rapidly behind the distant dunes.

The explanatory notes at the end of the novel are without doubt the best bit. Dr. Gibbins knows his stuff. It is just a shame that the title of the book is full of ancient Egyptian mystical promise. If it had been presented as a military story about the downfall of General Gordon of Khartoum it would have been more accurate. As it stands, Pharaoh is a mystery for all the wrong reasons.