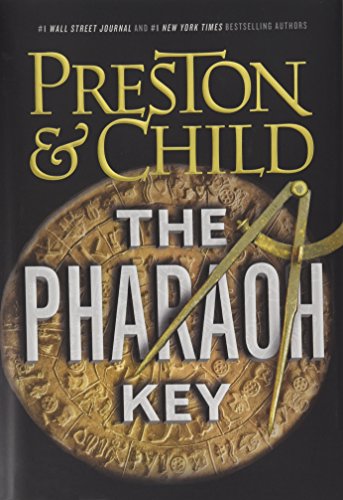 “The Pharaoh Key is a bouncing, page-turning camel ride across an exotic landscape we thought had been left behind a century ago . . .”

Adventurer Gideon Crew has received bad news. The arterial malformation in his brain that has been threatening his life now has progressed to the point where his doctor confirms he has only two months left to live.

Amorphous plans to spend his last days in a remote cabin in New Mexico quickly vanish, however, when he learns that his employer, Eli Glinn, has dropped out of sight and Glinn’s company, Effective Engineering Solutions, has abruptly shut down. Puzzled, Gideon and coworker Manuel Garza show up at EES to retrieve their things. They quickly sneak out with a translation of an ancient stone tablet known as the Phaistos Disk, which fortuitously topples into their laps.

The result? A mission to remote Egypt to locate a fabulous treasure that was the rumored foundation of the wealth of the ancient pharaohs. Living on borrowed time, can Gideon solve the mystery of the Phaistos Disk before the sun sets on his own personal world for the last time?

The Pharaoh Key is the fifth—and apparently final—novel in the Gideon Crew series written by the prodigious writing team of Douglas Preston and Lincoln Child. The previous four, including Gideon’s Sword (2011), Gideon’s Corpse (2012), The Lost Island (2014), and Beyond the Ice Limit (2016) fall into the action-adventure-thriller category also worked to great effect by Clive Cussler, Dan Brown, and others. They feature numerical analysis, encryption puzzles, locations off the beaten track, and decidedly strange circumstances.

While The Pharaoh Key faithfully follows suit, readers must understand up front that it has been deliberately written to fall into the “lost world” sub-genre of late-Victorian adventure fiction. It has the look and feel of something that would have been serialized in Blue Book Magazine or Weird Tales. It could have been lifted wholesale from a lost manuscript by Arthur Conan Doyle, Edgar Rice Burroughs, or Jules Verne. When Gideon remarks that someone’s theory “sounds like an old H. Rider Haggard novel,” the authors have hit us over the head with the obvious—their story is a time machine that has whipped us back to an Egypt that apparently never heard of Arab Spring.

It delivers all the Victorian clichés: a deferential, socially inferior camel driver and guide who’s likely also treacherous; a young boy delighted to run errands for his American betters for the equivalent of 25 cents; a bossy, suspicious English female academic who intrudes on their adventure and obviously knows more about it than they do; a local tribe who captures them and submits them to tests of courage . . . it’s all here. All we need now is treasure and a plausible way to get it back to the United States before Gideon expires.

Unlike Preston and Child’s previous offering City of Endless Night (the Agent Pendergast series), which offended basic intelligence on so many different levels, The Pharaoh Key is an entertaining read if approached with appropriately lowered expectations.

A reasonably good take on the lost world sub-genre, The Pharaoh Key is a bouncing, page-turning camel ride across an exotic landscape we thought had been left behind a century ago, if it ever existed at all. The novel reads quickly, it amuses with its obvious clichés, and it passes the time when there’s nothing better to do. If you’re prepared to accept its self-imposed limitations, then by all means—buy and enjoy.