The Petting Zoo: A Novel 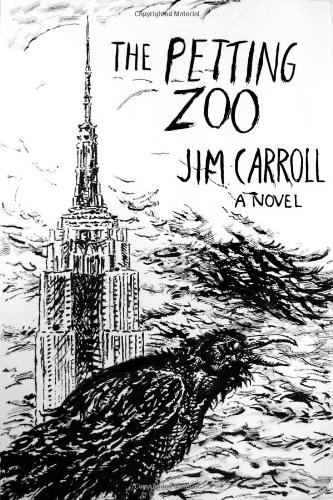 If Jim Carroll’s The Basketball Diaries reads like an homage to Jack Kerouac’s On the Road, his posthumously published The Petting Zoo finds the author paying tribute to Milan Kundera’s The Unbearable Lightness of Being.

The Petting Zoo centers on Billy Wolfram, a prodigious artist who suffers a public nervous breakdown during an opening at the Metropolitan Museum of Art. After a long weekend in a mental institution, Billy returns to his studio to find that he no longer has the will to create. Much of the novel, then, follows the artist’s efforts at not only understanding his own creative processes and the nature of art itself, but also exploring his past and the historical forces that both inspire and overwhelm him.

Among the characters that drift in and out of Billy’s life throughout his journey of aesthetic self-rediscovery are a rock star, a talking raven, and a host of figures from a fictionalized New York art scene—all of whom provide the protagonist with ample opportunities to ruminate at length on his artistic and sexual paralyses. Billy, it turns out, is a virgin—a phenomenon as unlikely in the context of the novel as the sudden appearance of the talking bird. That his self-imposed asceticism stems from a sense of childhood guilt over the Kennedy assassination, however, lends at least a modicum of dream logic to all that troubles the artist. In the end, such logic is what holds the novel together.

As a novel of ideas, The Petting Zoo does an admirable job of touching on a wide range of topics: art, inspiration, love, history, and commerce, among others. Yet due to the nature of the beast, much of the commentary on these topics reads less like modern dialogue than that of the classical Socratic variety. Throughout the novel, Carroll’s characters are prone to giving speeches and explaining the concepts with which they are working in minute detail. In some cases—as when the talking raven offers an exegesis of the flood narrative in Genesis—this technique works fairly well. In other instances—as when Billy’s assistant ponders the intricacies of their complex relationship—the strategy falters.

None of this is to say that The Petting Zoo is by any means a bad book. On the contrary, Carroll’s synthesis of disparate elements into a unified whole makes for an intelligent, imaginative read. Though not a page-turner in the traditional sense, Carroll’s final missive offers a complex and loving meditation on the relationship between art and all that makes us human.