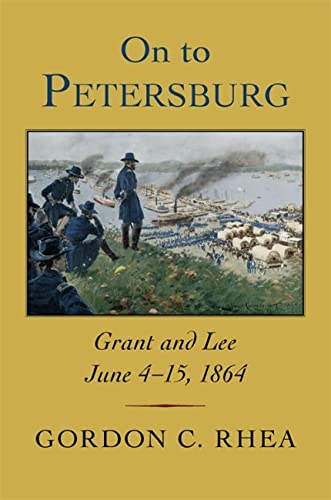 With the publication of On to Petersburg, Gordon Rhea has completed his unparalleled five-volume study of the Overland Campaign, arguably the most decisive campaign of the American Civil War.

Between May 5, 1864, and June 15, 1864, armies under the command of Union General Ulysses S. Grant and Confederate General Robert E. Lee slugged it out in the area of Virginia between the Rapidan and James Rivers.

Rhea describes the campaign as “six horrific weeks” of “combat and maneuver,” and “the most intense continuous bout of warfare the continent has ever witnessed.”

When the Overland Campaign ended, the Union had suffered some 55,000 casualties (dead, wounded, missing, captured) while the Confederates lost about 33,000 soldiers.

Unlike previous battles in the war’s eastern theater, the fighting during those six weeks in Spring of 1864 was almost continuous. Grant’s objective, writes Rhea, was not the capture of Richmond, the Confederate capital, but the “destruction of the Confederate armies” in the field.

With President Lincoln’s blessing and full support, Grant was determined, in his words, to “hammer continuously against the armed force of the enemy and his resources until by mere attrition . . . there should be nothing left but an equal submission with the loyal section of our country to the constitution and laws of the land.”

The Battle of the Wilderness was swiftly followed by the slaughter at Spotsylvania Court House. Then, the armies repeatedly clashed on the way to and across the North Anna River.

Next came Cold Harbor, where Grant sacrificed Union troops in ill-considered assaults on well-entrenched Confederate defenses. In his memoirs, Grant wrote that his greatest error in the war was ordering the final June 3rd assault at Cold Harbor.

Rhea’s fifth volume covers the time period between June 4th and 15th, as Grant skillfully shifted his forces from Cold Harbor across the Chickahominy River and James River to the outskirts of Petersburg.

The fighting and movement of armies in early and mid June 1864, Rhea notes, occurred on some of the same ground as the Seven Days Battles of 1862, when General Lee repeatedly bested Union General George McClellan’s efforts to capture Richmond.

The logistics of moving an army and its supplies across rivers and in the face of the enemy were complex. Rhea calls Grant’s maneuver to and across the James River “the most audacious venture of his military career.” Grant, he writes, “was juggling a host of cooperating elements—the Army of the Potomac, the Army of the James, the navy, and various engineers.”

This move also required coordination with Grant’s subordinate generals, some of who disliked Grant and each other. Rhea notes that communications between Grant and the head of the Army of the Potomac, General George Meade, had almost entirely broken down at this time.

The capture of Petersburg, explains Rhea, “would sever the Army of Northern Virginia’s supply lines to Richmond from the south, compel Lee to abandon his Cold Harbor fortress, and enable the Army of the Potomac to renew its campaign with overwhelming advantage.”

Rhea describes not only the logistical difficulties involved in this maneuver, but also the hard fighting at places such as Riddell’s Shop, White Oak Bridge, Matedequin Creek, Baylor’s Farm, and the Dimmock Line.

In the end, Grant failed to capture Petersburg, and the consequences of that failure would be a lengthy and brutal siege that lasted until April 1865 and produced a total of 60,000 additional casualties.

Rhea assigns blame for the failure to capture Petersburg to Grant’s poor coordination of Union forces at the decisive moment at the outskirts of the city, and to several subordinates who failed to attack Petersburg when it was lightly defended. But as General Pickett said after the South’s defeat at Gettysburg, the enemy’s forces also had something to do with it.

As in his previous volumes, Rhea masters the details of the armies’ movements and fighting without losing sight of the larger strategic perspectives on both sides.

Though the Overland Campaign did not end the war, Grant’s tenacious assaults on the Army of Northern Virginia during those six weeks effectively ended its offensive capacity. Grant could replace Union losses far more readily than Lee could replace Confederate losses.

With the Union Army across the James and the Army of Northern Virginia trapped behind entrenchments at Petersburg, Lee understood that the Confederacy’s defeat was “just a matter of time.”