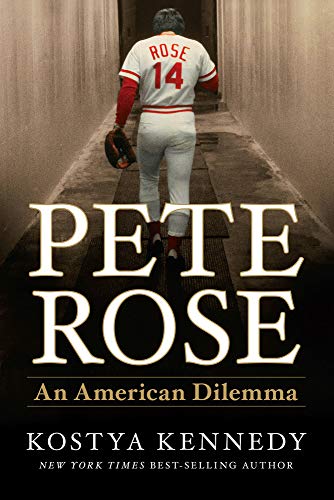 “Kostya Kennedy writes so majestically that the reader spends half the time trying to decide if a guy like Rose deserves such high-minded prose. . . . a fascinating look inside a world that has actually vanished.”

Three memories of Pete Rose: In the 1973 playoffs at Shea Stadium Rose sliding hard into Bud Harrelson and the ensuing brawl that nearly caused the Mets to forfeit the game.

In 1979 seeing Pete Rose dancing off third base at Shea with 50,000 fans expecting—and even hoping—that he would try to steal home.

Two months ago at the Mandalay Bay Shops in Las Vegas, Pete Rose sitting at a table in a memorabilia shop, the most exciting and explosive player in the history of baseball, now deeply damaged goods, a curiosity, a lion in winter.

People say baseball is America, but in reality Pete Rose is America: defiant, brash, unable to admit mistakes, and ultimately paying a huge price. Rose is the subject of this new, compelling, exhaustively researched biography Pete Rose: An American Dilemma.

The book is like the man himself: a train wreck so compelling that one cannot avert one’s eyes.

Pete’s story in brief: A working-class kid from Cincinnati who became the most successful hitter in the history of the game, beloved by fans and fellow players alike, whose gambling compulsion destroyed his reputation, his fortune, and his standing in the game. Rose went from national treasure to baseball pariah practically overnight. Today, still denied entry into the Hall of Fame—which his record as a baseball player unequivocally merits—he’s beloved by fans who can still see him gleefully dancing down the third baseline.

Kostya Kennedy writes so majestically that the reader spends half the time trying to decide if a guy like Rose deserves such high-minded prose. How much do we really need to know about a guy who never grew up, never did any kind of work outside of a ballpark or autograph session, and who cheated on and discarded wives and girlfriends without conscience?

And yet. He’s still Pete Rose. Kennedy’s moral outrage is reserved less for Rose than for his numerous critics, who to this day allow their distaste for Rose’s personality and lifestyle choices to cloud their judgment about his contribution to baseball. One senses that Rose is still denied the Hall of Fame not because he bet on baseball games from his office as manager of the Cincinnati Reds, but because he lied about it and has basically been a jerk for the last few decades. The counterargument is that there are plenty of other jerks in the Hall of Fame, which bothers Kennedy, but not Cooperstown.

It’s hard to say whether younger fans who didn’t grow up in Rose’s America, would care enough to read this book. If they do they’ll find a fascinating look inside a world that has actually vanished—back when sports were just sports and not entertainment content for myriad ESPN, FOX, and SI.com platforms.

You get Rose, in all his unvarnished vulgarness, and you get America in the 1960s and 1970s, portrayed with fascinating accuracy. Rose’s life is amply documented elsewhere, but Kennedy does shed new light on relationships with teammates, his personal life, and the baseball investigators and commissioners who booted him out of the game.

America loves rogues. Sometimes we put them on the all-star ballot, and sometimes we elect them president. We have a soft spot in our national heart for people who bend and break the rules and live life on their own terms, consequences be damned. Rose’s life reads more like the lyrics of a country song than a hero’s journey. Kostya has captured in this biography the story of a man who got to play not just the hero but the antihero on a national stage.

And despite all the lying and cheating—to baseball, to his wives and girlfriends—none of it matters. Like millions and millions of Americans my age, I still love Pete Rose. This book will show you why.