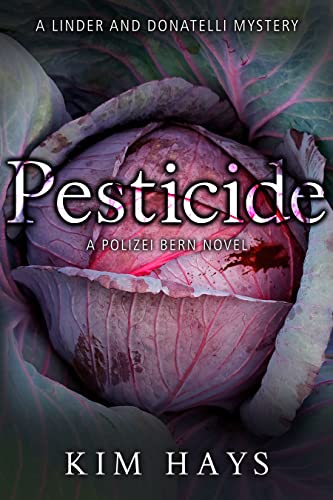 Plot points abound at the beginning of Hays’ Pesticide: rioters attack police in central Bern, resulting in a murder; police officer Giuliana Linder deals with accidental homicide while reevaluating her marriage to an increasingly distant husband; her friend and colleague Renzo Donatelli investigates the murder of bio farmer Frank Schwab.

Soon the plotlines merge. Etter, the man killed during the riots, was a friend of Frank’s. The farmer had let Etter use a portion of his land to grow marijuana illegally but organically. When Etter wanted to increase his operation, Frank wouldn’t allow it. Etter approached several neighboring farmers, but they weren’t interested, either. The two men were murdered within a day of each other. A coincidence? Unlikely. Killed by the same hand? Perhaps.

Hays’ debut novel, set in present-day, is a solid police procedural imbued not only with realistic details about police work but also details about Swiss farm life. The settings easily switch among urban spaces in Bern to the police station to Giuliana’s home to the countryside where the organic farmer met his match.

Readers are provided an explanation of the Swiss bio industry, its pros and cons, and its sensibilities and controversies. Hays deftly problematizes issues such as competition among organic farmers as well as distributers. These are key issues, especially today, as farmers argue the viability of organic products, monitor their effects, and work toward a sustainable future.

Although there are a number of police officers involved, Hays’ novel is subtitled “A Linder and Donatelli Mystery.” Giuliana Linder is a competent investigator: curious, quick-witted, capable even when interrogating the likes of drug dealers whose lifestyle she abhors. She’s threatened at work by demanding superiors who expect faster results, but she wiggles past them to run a competent and responsible investigation.

Her homelife is rockier than her professional life. Her husband is a journalist who has lost sympathy for the police and their methods, and their daughter gets arrested for disobeying police at the out-of-control outdoor Dance-In. Only son Lukas is oblivious to the tensions that shake the house.

Giuliana’s go-to outlet is problematic. She works out with Renzo several mornings a week. Renzo enjoys these sessions immensely because he appreciates Giuliana both professionally and emotionally. He’s been married six years himself but fears his wife only wants him for sex. He and Giuliana are drawn to one another and have a hard time resisting a growing mutual attraction.

The deceased farmer also had problematic romantic ties, namely with a woman he saw off and on for many years. Since Louise was out of town at the time of the murder, she’s soon cleared of any suspicion for wrongdoing. She suspects that any foul play has to do with bio-farming, but who could possibly want Frank dead? There is no apparent reason. Thus the investigators start the slow, methodical process of talking to neighbors, studying camera footage, and hunting down local lowlifes.

Hays’ pace is not quick. She methodically takes us though Giuliana and Renzo’s eyes as they work through their investigation. Yet every step rings true. Obvious suspects have no interest in a farmer’s death or the death of a would-be drug dealer. Tensions rise due to bio-farming, not personal vendettas. The tone is consistent yet reasonable as we glimpse into the lives of Giuliana and her cohort. While details slow the narrative, the rich picture is worth the extra time. When Giuliana and Renzo home in on their best leads, we have a complete picture of the characters as well as the Swiss farming scene.

Throughout, Giuliana and Renzo are realistic as well as sympathetic. Giuliana is juggling her marriage with her career with motherhood with Renzo. By seeing Switzerland through her eyes, we have an insider’s view. For example, when she learns about the habits of a known criminal, she explains: “Ah. Swiss punctuality expected even of drug dealers. Giuliana suppressed a smile.”

When Giuliana struggles to respond appropriately to her daughter’s disobedience, she reflects on her own past: “Giuliana couldn’t understand why parents ranted at their kids for doing the same idiotic, reckless shit that they’d done as teenagers. But surely she hadn’t been as young as Isabelle when she’d started defying her own parents.” Giuliana is reasonable and genuine. We want her to succeed on all levels because we identify with her from the start of the story.

Her counterpart is equally sympathetic. Renzo wants to get closer to Giuliana even though he’s married and respects Giuliana’s marriage as well. There is a connection between them, however, that Renzo can’t understand or ignore: “Renzo had noticed Giuliana as soon as she entered the cafeteria. Why was she at work? Maybe that old geezer she’d been assigned to the night before hadn’t hanged himself after all. From across the room he watched her move down the food line. He forced himself to do nothing to attract her attention, but still she waved and started toward his table.” Renzo wants to spend as much time with Giuliana as possible. Assisting her investigation is as important for him professionally as emotionally.

Readers might expect the pair to have many successful cases together and perhaps to grow closer with each succeeding volume. For this first outing, readers are treated to a solid police procedural set in a town rarely represented in the mystery genre but well worthy of a close read.