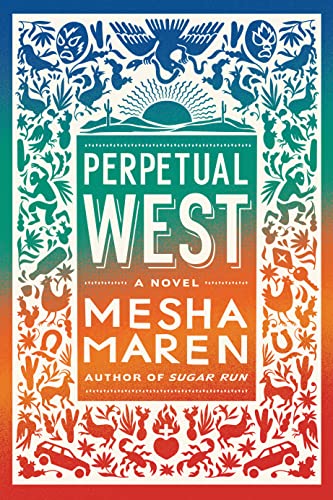 “Ultimately, Perpetual West is an engaging tapestry of ideas.”

In the 19th century, the journalist John L. O’Sullivan, wrote about America’s “manifest destiny” to occupy all of North America in order to provide land for the growing population and also to spread American values and democracy. He was describing the impetus, already underway, to expand the young country by whatever means necessary. It was an ideology that inevitably resulted in genocide and the dispossession of indigenous and other established populations.

Criticism of historical American expansionism is a subtext of Mesha Maren’s new novel, Perpetual West, which opens with a literal westward movement. A young married couple, Elana and Alex, move from Virginia to El Paso, Texas, and enroll at the University of Texas. Alex, a sociology graduate student, is drawn to El Paso because of its proximity to the Mexican border city of Juaréz, from which he had been adopted as an infant by a couple from West Virginia. Elana is more than willing to tag along with Alex in order to escape the tension of her own troubled family—her widowed father and her drug-addicted brother.

Alex initially intends to study “the psychogeography of accountability—the way physical separation of the border let American entities shift blame,” by, for example, directing environmental pollution from factories toward Mexican rather than US territory and, under the North American Free Trade Agreement, exploiting cheaper Mexican labor.

At one point, a friend who has read his research notes, summarizes Alex’s academic focus in this way: “A theory he’s calling ‘perpetual west,’ this idea that, for those Americans who are still caught up in some form of the frontier thesis and manifest destiny, Mexico is the final and perpetual frontier, a place of eternal contrast that America can always compare itself favorable to. Mexico as the ultimate crucible for the formation of individual identity, a great plow to break yourself against and find out who you really are.”

In fact, though, Alex has refocused his attention on a narrower crucible of identity, Lucha Libre, the uniquely Mexican version of professional wrestling, and the way it “forms an outlet for an unspoken conversation about violence and government corruption.” His investigations of Lucha Libre in Juaréz lead him to a particular wrestler, Mateo, known professionally as El Vengador del Norte. Uncharacteristically—at least until the reader learns more about his repressed youthful homosexual desires—Alex begins a sexual relationship with Mateo. He is, as his original thesis suggested, finding out who he really is.

But Perpetual West is in many ways Elana’s story. The first half of the book, as we learn about her relationship with Alex and see them spar over little things (cellphones, her disinterest in the undergraduate classes she’s enrolled in, his fascination with Juaréz) is focused on Alex and the exploration of his sexual awakening with Mateo as they embark on a road trip from Juaréz to Chihuahua. The reader may struggle to understand, as Alex does, what the point of this trip is, or why he makes no attempt to let Elana know where he is.

When Elana does discover, upon returning to El Paso after a week-long visit to Virginia, that Alex has disappeared, the story, which has moved slowly up to that point, really takes off. She begins a search for him. The El Paso police are no help, for a variety of reasons, and she has few contacts of her own in Mexico. Instead of pondering her family troubles and her own fragility—she’s teetering on the brink of anorexia—as she does for much of the first half of the book, she takes action.

At this point, we also begin to learn more about what really drives Elana. Instead of schoolwork, she has been researching the colonialist impressions of Mexico in the work of writers like Rebecca West, D. H. Lawrence, and Graham Greene. “All of it was sickening, but what struck Elana most were the repeated allusions to darkness and masks and incomprehension. As if the pigmentation of a person’s skin and eyes made it probable that they lacked a spirit or any ‘burning ambition’ at all.” Her interest in this subject certainly deepens the book’s anti-colonialist subtext, although it isn’t clear why Elana is drawn to it. Is it because of Alex’s Mexican heritage? Or perhaps it’s because of the influence of her liberal academic father.

When she explains to her brother what she’s working on, he’s dismissive: “Oh, I see,” he says. “So an Anglo woman’s perspective on other Anglo perspectives on Mexicans, no Mexican perspective necessary at all.” Simon has raised a good point, though, one that Alex has heard from Vivi, a Mexican friend, who asks why Mexicans need an American, even one born in Mexico, to tell them what’s wrong with their society.

Meanwhile, the reader knows what Elana does not, that Alex and Mateo have been kidnapped by Neto, the wrestling promoter and narcotics trafficker who controls Mateo. Alex becomes Neto’s leverage in forcing Mateo to do his bidding. But Neto, who seems to have his own homosexual leanings, is also attracted to Alex, and attempts to justify the drug trade by invoking his resistance to manifest destiny, although he doesn’t use that term. He sees that Mexican migrants to the US are like the American pioneers who settled the West in order to create better lives for their families. Neto, rationalizing the drug trade, says that he provides an alternative to the risks of migration.

Ultimately, Perpetual West is an engaging tapestry of ideas. It illuminates the flaws of American imperialism as reflected in the manifest destiny doctrine and at the same time sheds light on violence and corruption in Mexico, a problem that the U.S. has in some ways created through our arrogance and insatiable appetite.