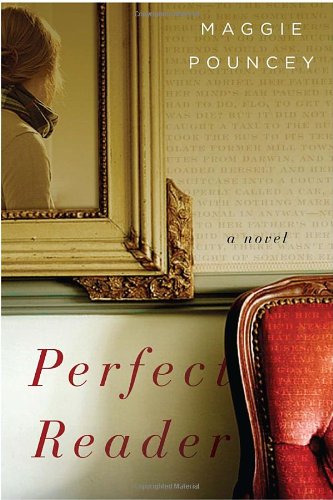 Maggie Pouncey is bringing back language, slow and careful language. It’s the type of language that began to disappear in the 1960s. The language that the daughter of a college president might have grown up hearing . . .

“One gave the dog a sop, not a treat or bite; one woke not at dawn but at sparrow fart, and wore not party clothes but finery. Now it was like speaking Yiddish, or some other dying language; soon there would be nobody around to talk to.”

Perfect Reader is a story of a not-so-young 28-year-old woman who returns to her hometown after her father’s death. Daughter Flora Dempsey has returned to Darwin, Massachusetts, from, presumably, Boston. Flora’s father was the president of Darwin College (as the author’s father was the president of Amherst College), and also a noted literary critic, professor, and sometime poet.

Flora is a rootless person who has not yet decided what to do with her self or her life. She’s disoriented returning to the small college town built on “liberal well-meaningness;” it’s a town more than a bit reminiscent of Davis, California. But then she felt no more at home working in the city.

Flora’s parents had been divorced many years before and she has made her best career out of avoiding her father. Now the time for avoidance is gone. She must handle his funeral arrangements, and everything her father owned—his home, his writings, and his books—has been left to her.

This is not the least of things, as Flora learns that her dad had a lover, a female instructor from the college. Flora’s father spent the last year or so of his life writing poems to this woman. The woman wants to be close to Flora, but Flora just wants to isolate, to have people leave her alone while she ponders her next steps. In a strange way she envies her father’s escape from the people who trouble you: “The dead left you alone, but it was the living who filled you up with loneliness.”

“Flora felt her life shrinking. The smallness of the table provided a good metaphor. No room for other people. Soon her life would cease to be a table; it wouldn’t even be a cocktail table. It would be a solitary chair, hard-backed and wooden . . .”

This likely sounds depressing but in the telling—a careful and precise telling—it is not. The Boston Globe called Perfect Reader, “(An) exquisitely observed drama.” This is because it comes down to the words, the language, which makes the reader feel like he or she has picked up a novel from the wrong decade, if not century.

It is, however, slow. This is something that some readers will have a problem with but it is deliberately slow. The author has said that, “so many of the books I love are slow.” If and when this novel is made into a film, there will be no car chases, no gun battles, no slaps or loud confrontations. It will be a moody movie that will be loved or hated.

I loved this very contemplative story set around a basic theme. Does a child, even an adult child, grow up by escaping her past or by embracing it? Whose life is it and, presuming it’s your own, why do we pay such a high price for not fulfilling the expectations of others?

Although Flora’s father has passed (and Flora so hates that people will use any word in the English language but dead) she must nonetheless battle her mother’s expectations, and the fact that she fails to heed her mom’s advice. In one primal scene, Flora’s mother suggests that she volunteer somewhere in order to provide “some structure” to her life. “How wonderfully helpful, Mom. How sage . . .” responds Flora who is tired and “regressing, moving backward, growing down.”

Yes, our protagonist Flora is not someone who everyone will like or relate to. She’s brittle and angry and exhausted but, two years short of her third decade on this world, she’s reached the point of decision-making. Who and what is she going to be in her life?

Perfect Reader is not for everyone. For me, it was close to a perfect read.