The Perfect Other: A Memoir of My Sister 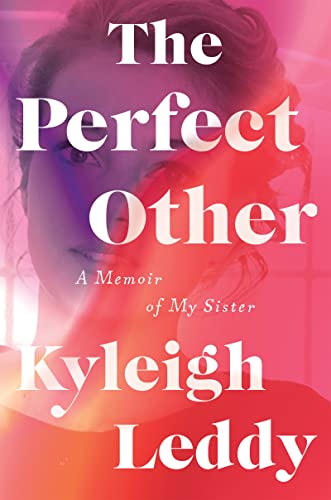 On the cold night of January 8, 2014, 22-year-old Kait Leddy walked onto the Benjamin Franklin Bridge in Philadelphia. She was wearing a red North Face jacket, and in surveillance photos she’s there one moment and gone the next. Her body was never found. Officially she’s missing and presumed dead.

The Perfect Other by Kyleigh Leddy is subtitled “a memoir of my sister,” and it follows her to that bridge and beyond, as the ripples from her disappearance wash over the lives of the author and her mother. It’s a tightly focused work, but an endlessly ruminative one.

What if Kyleigh, six years younger, hadn’t been preoccupied with next day’s test the night Kait disappeared? What if her mother had stayed with her distraught daughter instead of going home? What if Kait hadn’t hit her head during her brief time at Drexel University? What if Kait’s doctors at the University of Pennsylvania had connected her illness to treatable encephalitis, as was happening in other wings of U Penn’s hospital at the very same time?

It's impossible to know if any of these things would have made a difference. Kait’s symptoms began to manifest early in her life, long before she hit her head, though she definitely got worse after that happened. She was on a path of self-destruction that was probably not altered by a few careless words or inactions. But Kyleigh very much blames herself for what happened to Kait until, near the end, there is promise of redemption.

Kyleigh first told her story in the New York Times. She won the college essay contest, whose prize was an appearance in the Modern Love column. “When someone you love disappears, there’s no finality of an autopsy report or the closure of a funeral,” she wrote. “All you have is a lack of presence.”

So we have the first half of the book, as Leddy recounts life with her amazing sister—smart, outgoing, easy to make friends, and so beautiful she worked briefly as a model. The two girls were close, with an imaginary language and shared clothes—and secrets. Kait was a wonderful older sister until she wasn’t. In a chilling scene, the sisters are watching television together when Kait suddenly declares, “Why are you holding your spoon that way?” A hateful tirade follows, and it’s mirrored by fights Kait has with her mother, teachers, and fellow students.

Leddy is a wonderful writer and tells this early history from the bewildered perspective of her younger self, who just wanted her loving sister back. But this part of the book could perhaps be opened up further. Leddy’s father, a computer programmer and internet pioneer who mistrusted mental health treatment, is a ghostly figure here, as are the close friends who jump out at any reader who opens Kait’s still-extant Facebook page.

After Kait takes a taxi to that bridge, Kyleigh goes through the familiar stages of grief, and—although outwardly still functional—sinks into a deep depression. A party she attends turns out to be in the shadow of that bridge. A birthday turns disastrous. There are casual remarks from friends, a strange call from Kait’s number, an errant text, and even a close encounter with an apartment with “Kaitlyn Leddy” written on the nameplate. She is frequently in tears as her friends ask her what’s wrong from the other side of the door.

These scenes are intercut with scientific citations. Other people have been here before, but the literature isn’t all that helpful for Leddy, who notes we know more about outer space than we do the human brain. She isn’t going to find a secret key to what caused her sister to spiral out of control, something she finally acknowledges near the end of the book.

It’s the stuff of movies that healing starts when people walk on the beach in Nantucket, but that is indeed what actually happens to Kyleigh and her mother. Instead of seeing signs of her sister everywhere, the author starts to emerge into some form of light. The wound is permanent, though, and 100 percent recovery from trauma only happens in movies.

Leddy is now studying for a master’s in social work, and she hopes that her book can help other families. Schizophrenia is not uncommon—it affects 2.6 million adults in the United States aged 18 or older. Sometimes just knowing you’re not alone is the best therapy.