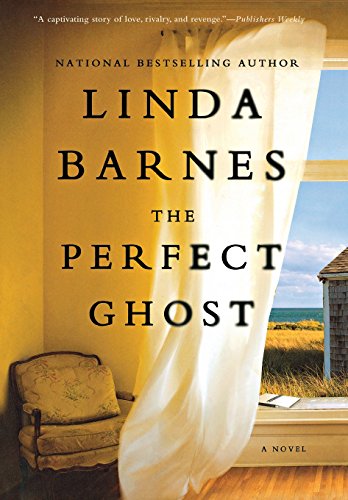 “Don’t be surprised if Linda Barnes gets an award for The Perfect Ghost, . . .”

The Perfect Ghost is a bundle of surprises.

The first comes from an established series author spinning off to produce a stand-alone novel. If you’re a regular follower of publishing industry news or Ms. Barnes’ website, this won’t surprise you. But ordinary readers waiting for the next Carlotta Carlyle mystery may be caught off guard.

The next surprise comes from the main character, Em Moore. She’s about as opposite from the bold P.I. Carlotta as a gal can be. Em is not just shy: She lives in a near constant torture of anxiety and has set up her life to minimize contact with the outside world. She only survives within it because of her writing abilities.

Em manages to hook up with a former teacher, Teddy, who ghostwrites celebrity autobiographies. Through their partnership she finds love, trust, friendship, guidance, and opportunity.

But then her mentor is killed in a car crash, leaving her alone with a contract and deadline for their potentially biggest bestseller yet.

Em knows she can write it—Teddy had already recorded most of the necessary interviews—but the primary interview remains to be conducted: that with the book’s subject, film icon Garrett Malcolm. He has just returned to his family estate on Cape Cod to revive a theatrical production of Hamlet in a dynamic new way and is surrounded by Very Important People.

Quaking in her shoes, Em propels herself from Boston to the Cape to perform the final interviews, discovering in Malcolm a Svengali she can’t resist. He sucks her into the complexities of his life, giving her great material for the book—most of which she can’t use—as well as exposing her to its dirty underside and arousing her suspicions.

Em begins to recognize that Teddy didn’t just die in a single-car accident . . . he may have been murdered.

Surprise number three comes in the book’s construction. Instead of a straight line investigation conveyed through the main character’s viewpoint (à la Carlotta Carlyle), it cycles between three POVs: 1) Em’s story in her own voice, talking to her personal ghost of Teddy; 2) the backstory of Malcolm and his world (and personal ghosts) via Teddy’s transcribed interviews; 3) and emails by Detective Snow, the beleaguered small town cop working on the car crash.

These alternating chapters allow everyone to speak for himself or herself, eliminating the need for connective description. This approach works splendidly in building up the story, step by subtle step. The absent Teddy comes across as fully fleshed as the living characters, though he is defined by implication. All the central characters evolve as the story advances.

The best surprise isn’t really surprising. Ms. Barnes is known for tight, flawless prose and perfectly paced plots and character development. Her craftsmanship, however, really stands out this time around. It’s easy to understand why she has won prestigious mystery awards and been many times nominated for others. Don’t be surprised if Linda Barnes gets an award for The Perfect Ghost, too.

The book’s final surprise, however, isn’t a pleasant one. A twist ending comes as a shock, making one want to page back through the story and see what hints were missed. It leaves a sense of turnabout or disappointment, if not a sour taste in the mouth.

Conversely, it also makes this novel stand apart from other literary mysteries and crowns a masterful psychological suspense story, lingering in the mind long after the cover is closed.