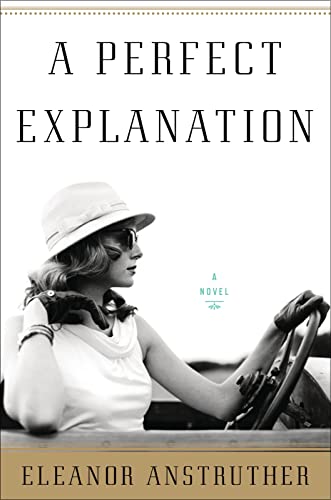 “a nuanced exploration of family jealousies, mental illness, and repercussions that reverberate throughout generations.”

Enid Campbell Anstruther is an old woman in a Christian Scientist Nursing Home in Hampstead. When a nurse accidentally tells Enid that her daughter, Finetta, is bringing her son to visit, the carefully constructed story Enid has told, and has almost come to believe, confronts her with an avalanche of memories she would rather forget.

Enid was raised a child of privilege. Growing up in a castle and the granddaughter of a Duke she has all those things which wealth and rank supply, with the always welcome addition of beauty. As a young woman she meets Douglas Anstruther in Florence and enters into a hasty engagement, not because of love but as a way to get her mother’s attention. But hasty engagements seldom end well, and soon after the war Enid finds herself wed to Douglas.

Her mother gives her an emerald ring, an heirloom passed down in each generation to the first daughter who weds, with the haunting words, “you don’t deserve this but heritage dictates, and heritage always wins.” This notion of heritage will eventually be Enid’s undoing. Favored by her father and despised by her mother and sister, Enid’s world is destroyed when both her father and brother die. Desperate for an heir, her mother bears down on Enid, who obediently produces a boy, Fagus.

Enid is crushed by the weight of love and responsibility she feels for Fagus. Unfortunately, it soon becomes clear that all is not well with her son. In her mind she keeps shouting, “his head is too large,” but no one seems to notice, enraptured more by the idea of the heir than the reality.

After a tragic accident, when it is clear that Fagus will not at all do as heir, Enid has another son. Soon after, a mental breakdown ensues that puts in motion events that will resonate throughout generations.

Escaping to a Christian Scientist community, Enid regains her strength, but not her mental resilience. Realizing she wants a divorce, she finally writes to her husband, Douglas, who readily agrees. But Enid is not prepared for the fight her sister, Joan, will wage to take her son, Ian, from her. After 12 years of court battles, Enid is awarded custody of her children. But Joan, who has inherited a substantial fortune from their mother, is quick to cut off Enid and leave her penniless.

Without resources, Enid is finally broken when her son, Fagus, dies. In an attempt to survive, she writes to Joan and informs her that she can have Ian for the sum of five hundred pounds—enough to pay her lawyers and substantial debt.

Decades later, Ian finally visits his mother in her nursing home but not to make amends and reunite. Instead, he has come to take a valuable portrait that Enid possesses and one he feels entitled to. As in real life, perfect endings are seldom realized and forgiveness is hard to get.

The story bounces from elderly Enid in a nursing home in 1964 to the 1920s when the story takes place. In this manner, we are able to see the “patchwork of mistakes” made by everyone involved and the consequences that fell upon the children.

Author Eleanor Anstruther seeks to give a voice and dimension to a real person, one who happens to be her grandmother. She paints her as a sympathetic character, though not one that is particularly likeable. Instead, we are shown the darker side of privilege and the expectations that come with it.

A Perfect Explanation is, at its heart, a story without heroes. Instead, it is a nuanced exploration of family jealousies, mental illness, and repercussions that reverberate throughout generations. Anstruther has given us complex characters who do not bow to formula or reader expectations. Instead, she offers a wholly believable glimpse into the harshness that can come with rank and privilege.