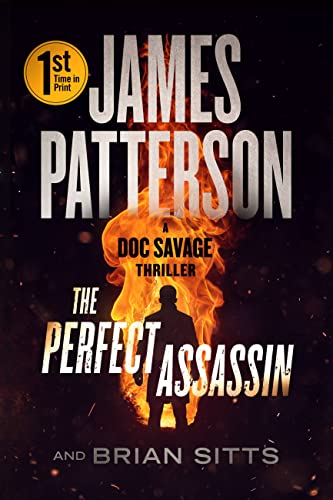 The history of Doc Savage as a hero in popular fiction is long and colorful. Starring in his own Street & Smith pulp magazine in the 1930s and 1940s, the character experienced a significant reboot in the 1960s when Bantam Books reprinted the stories in a series of paperbacks featuring iconic cover paintings by James Bama.

Establishing an indelible image of Doc as a muscular Man of Bronze with a perpetually tattered shirt and trousers, exaggerated widow’s peak, and a stern, no-nonsense expression, the Bantam covers mesmerized a new generation of fans who devoured the series, memorized all the details of every story, and elevated Doc and his team to cult status.

Comic book versions and movies that followed seldom measured up to the expectations of this demanding fan base, and so it would seem that James Patterson and co-author Brian Sitts have taken on quite a challenge with yet another reboot of the franchise.

The Perfect Assassin introduces Dr. Brandt Savage, great-grandson of Clark Savage Jr., a.k.a. Doc Savage. The antithesis of his famous ancestor, Brandt is a solitary 90-pound weakling and milquetoast who teaches anthropology at the University of Chicago.

When he’s kidnapped by a woman who calls herself Meed, he unwillingly begins a physical and mental transformation into something he never thought he would or could become: an action hero in his own right.

It’s important to understand that the authors have not attempted another resurrection of the fabled Doc, but have updated the storyline to modern times with Brandt, his descendent. As a result, most of the conventions we loved so much in the original stories are not present.

His gadgets, library, and bottomless bag of tricks make token appearances only, and the passage of time has rendered them rusty, dust-covered, and mostly irrelevant. As well, no mention is made of his trusty aides—Monk, Ham, Johnny, Long Tom, and Renny.

Perhaps the most significant omission from the original canon are the strange, bizarre, Fortean elements that infused the stories with an aura of otherworldly, almost supernatural, mystery. The fact that Doc always discovered a rational, scientific explanation for these weird phenomena did nothing to lessen their power as a hook to engage the reader, and their absence here cannot help but be noticed.

Indeed, the novel reads more like a conventional thriller than a Doc Savage adventure, and readers could be forgiven if they wonder why the authors didn’t just invent a new hero instead. The domination of the plot by Meed and her backstory could easily have been the foundation for an original series with Meed as the headliner and Brandt as a nobody molded into a new action hero by her harsh but effective techniques.

That said, this novel is a first-rate thriller that’s a pleasure to read. The story has virtually no body fat on it, and it moves with commendable speed through both plotlines. Meed and Brandt are both engaging characters, and we’re left wanting to know what will happen to them next.

In fact, The Perfect Assassin is a perfect introduction to what may prove to be a top-notch series of thrillers. Whether it will succeed as a Doc Savage series will depend on what they do with the familiar conventions left out of this one. There’s no doubt, though, that this debut has earned a sequel.