Peppa Pig and the Vegetable Garden 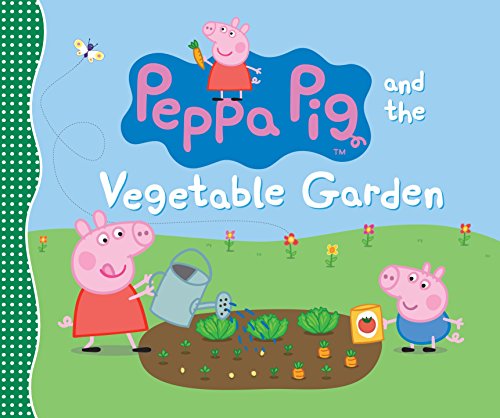 “They can pretend to be worms, butterflies, snails, and any other creature that captures their imaginations.”

Peppa Pig began life in the spring of 2004 as a British animated television series for toddlers. Fifteen months later, the series premiered on American television. The 5-minute episodes now are broadcast in 170 countries around the world and the franchise is a $1 billion a year money-spinner, according to the Daily Mail newspaper. In America fans can view episodes seven days a week on the Nick Jr. channel.

In this episode-turned-picture book, Peppa Pig and her brother George are visiting their Grandpa Pig and Granny Pig’s house, helping Grandpa Pig in the garden.

They learn that when you plant seeds and water them, they grow into plants. Eager to see the seeds grow, the pig children wait, and wait, and wait. “’It’s not doing anything,” says Peppa. Grandpa Pig laughs. ‘You have to be patient.’”

To while away the time, the children begin to play games in the garden. They pretend they are snails. Inspired by seeing a butterfly, Peppa flits about the garden waving her arms. George wants to be a butterfly too, but Peppa suggests he play worm. George doesn’t like that idea until Grandpa Pig shows them what fun it is to wiggle on the ground. The three of them pretend to be worms.

Birds disrupt this Eden when they come to eat the planted seeds. Granny Pig, who has joined the group, suggests they build a scarecrow. The children enjoy this new project, and then kind-hearted Granny puts out a bird feeder so the avian visitors don’t go hungry.

The family picks blackberries for a pie and then vegetables for their luncheon salad. George is dubious about eating his greens. Will Grandpa Pig be able to get George to change his mind?

While the story line lacks the energy and excitement of Peter Rabbit’s white-knuckle escape from Mr. McGregor’s garden, the clear, cleanly written text does introduce the preschool set to the concepts of planting seeds that will grow into plants, creative play, harvesting your crops, and eating your greens. The simple, colorful, cartoon-like illustrations have enormous appeal to both toddlers and parents.

This is a comfortable book that children will want to have read and reread to them. Once they know the story, they can “read” the book to themselves, following the plot through the pictures.

Savvy adults can use the ideas in the story to encourage their charges to engage in creative play just like Peppa and George or the characters in the classic Little Golden Book, I Can Fly. They can pretend to be worms, butterflies, snails, and any other creature that captures their imaginations.