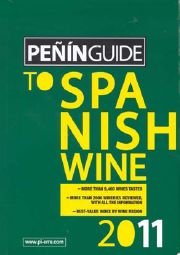 Of the Old World wine countries of Western Europe, few have changed more radically in recent years than Spain. It has long had the most acreage of land devoted to vineyards of any country, although the third largest producer of wine by volume (many acres are still widely spaced bush-trained vines). Increased investment since joining the EU, plus the need to compete in the international market, have brought tremendous growth and improvement to the industry.

The format of the Peñín Guide stays constant from year to year. After an introduction by José Peñín and an introduction to the wine team, the sections on how to use this guide, how the wines were tasted, varieties, the terroir, and climates and microclimates stay the same from year to year. Both the 2010 and 2011 editions, for instance, indicate: “As a new feature, in this 2007 edition, and given the overriding objective not to increase the number of pages more than is necessary, in order to ensure it remains handy to use, only wines whose score is equal to or higher than the 80 will appear with tasting notes. For the rest, only the score will be given.” Thus, once one has read the first 30 or so pages of an edition, the introductory part of the book may be skipped for subsequent editions except as a refresher.

The heart of the book is the guide to wines, arranged alphabetically by DO (Denominación de Origen) or DOC (Denominación de Origen Calificada), then Vinos de Pago, Vinos de la Tierra (the Spanish equivalent to the French Vin de Pays), and finally Table Wine. For those of us starting out in wine when there was just Sherry, Rioja, and Miguel Torres (as far as Americans were concerned), it is a bit daunting to realize that there are now 73 DOs and Vino de Pagos to keep track of in Spain, with more to come.

New this year is Peñín’s assessment of how good the vintages were from 2006 through 2009 in that particular region. Previous editions just had one table showing the assessment of the most recently released vintage (2008 in the case of the 2010 edition) for each DO.

Following this introduction, each winery in the DO that had submitted samples is listed in alphabetical order, with address and telephone/fax numbers, email address, and web site. Then each of the winery’s current releases is listed, providing the grape varieties, a point score, and a two- to four-line description of the wine’s appearance, aroma, and flavor.

It is unfortunate that no price is provided. Perhaps the Spanish edition had this information, because José Peñín says in his introduction:

“A [piece of] information we keep requiring [of] producers most emphatically is that of price, since it is paramount to understanding the wines real ‘value’—the ratio between price and quality—and has become the piece of information that most interest arises between buyers, sellers and importers, much more indeed than the rating itself. For it is undoubtedly more important to buy a 3€ wine with 87 points than a 30€ one with 95 points.”

Quite a few of the wines in the book are not available in the United States, and a good calculation of a retail price in dollars may be difficult, but perhaps Peñín could follow the lead of the Italian wine guide Gambero Rosso and include a numerical rating that refers to price ranges in Euros, so we at least have an idea of the wines’ relative values.

How useful and accurate are the wine ratings and descriptions? I happened to be drinking a 2004 Bodegas Riojanas Monte Real Rioja Reserva when starting this review. Looking up that wine in the 2010 edition, figuring it was released earlier than would be in the 2011 edition, it was rated an 84, and was said to be made from 80% tempranillo, 15% mazuelo, and 5% graciano grapes. There was no written description.

Surprisingly, the very same 2004 Monte Real Reserva is listed again in the 2011 edition. This time, it was rated an 88, was said to be made from 100% tempranillo, and had this description: “Colour: dark-red cherry. Nose: roasted coffee, fruit preserve, spicy, complex, old leather. Palate: flavourful, spicy, round tannins, round.” We would have rated it an 86, and found no spiceness whatsoever. Having the same wine twice in two editions, with different grape constituents and significantly different ratings, was a bit disconcerting.

A local wine shop happened to be pouring some Spanish wines, so we wrote down our impressions to compare later with the Peñín guide. Here were the results (the back of the book contains very handy guides to both the wineries and the individual wines, so it was easy to find them).

As is typical, then, wines taste very different to different individuals, and you may find completely different aromas and flavors when you try these same wines. But at least for this small sample, there was close agreement on the point scores.

The value of the Peñín Guide, therefore, comes from the discussion of the individual DOs, along with the maps, as well as an informed assessment of the quality of individual wines. Perhaps ratings are not critical to the enjoyment of a particular wine, but with the bewildering variety of Spanish wines available in the U.S., this book can help in deciding which wines to try first.