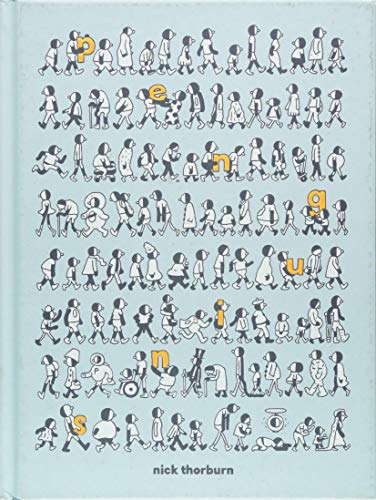 Nick Thorburn is best known as the lead singer of the indie-pop band The Unicorns, and his work carries with it that deliberately whimsical approach to art and creation. The Unicorns emerged from the early-2000s Montreal scene that also produced bands like The Arcade Fire. The influence of that scene is clear in Thorburn’s technical ability, introspection, and sustained internal focus that first fascinates but ultimately alienates its audience.

Penguins is less a graphic novel than simply a book of comics. The collection has no plot or progression of ideas. No text articulates the author’s intentions, and no dialogue connects one figure to another.

Instead, Thorburn’s pen-and-ink sequences present anthropomorphic penguins who struggle wordlessly against a bleak and indifferent world that inevitably defeats them. The penguins represent a recognizable cultural perspective: male, millennial, implicitly white, and ongoingly bemused. Their sorrow comes not from injustice but from surrealist indifference.

The book is at its strongest when Thorburn engages with the alt-comics canon. Some comics recall and subvert the juvenile humor of the best years of Mad Magazine. Mad leaps away from its satirical purpose into full surrealism. They joyfully deny meaning and dissolve before the reader’s eyes.

Several other fine sequences vividly recall R. Crumb’s work. The human body is rendered in all its grotesquerie, sex and desire are stripped of any pornographic implication, and penises degrade mock-heroic sequences. The Crumb-style images are complex and intensely colored. They stand out in a book which is otherwise minimalist and monochromatic. Their presence throughout the book argues against the penguin-characters’ Sisyphean despair; the sheer grossness screams out for hope in the midst of bleak ennui.

Thorburn’s artist’s statement offers more language than the book as a whole. He writes, “Penguins go through a lot of hell that could be avoided if they had the ability to fly. This cruel irony lends itself to humor, as well as sadness. Death and the desperate search for love and companionship seem so tethered to life as a penguin, as well as for humans, and so the goal was to bridge those two and make them funny.” Thorburn does, initially, succeed in evoking the crucial humor, but the joke is simple and easily exhausted.

Ultimately, the collection does not manage to move beyond its short-sequence premise. Most sequences blur together. A simple penguin-man encounters an obstacle or possibility for joy, utterly fails to prevail, and despairs or self-destructs. The sheer size of the book (288 pages) becomes overwhelming. Will the penguin transform or prevail? No. Will love—straight or queer—overcome simple obstacles? Unlikely. Will the hero be devoured by sharks? Quite probably, though an alligator might insert itself for variety.

The book isn’t without its merits. In addition to the Crumb-influenced sequences, there are a handful of pieces which morph the penguin-characters between anthropomorphic birds and realist penguins, with startling and beautiful results. The penguins’ dreams of flying briefly elevate the reader from the book’s sea of existential despair.

A reader who enjoys existential despair might truly value this book. Young adults seeking a visual representation of nihilist despair will thrill to find Penguins. They will pass the book from backpack to backpack, peering into its hopeless sequences and deriving crucial philosophical insights that will sustain them through their teenage years. That function has value: energy put into framing youthful anxiety isn’t wasted, though older readers will likely shrug and move on.