The Penguin Book of the Modern American Short Story 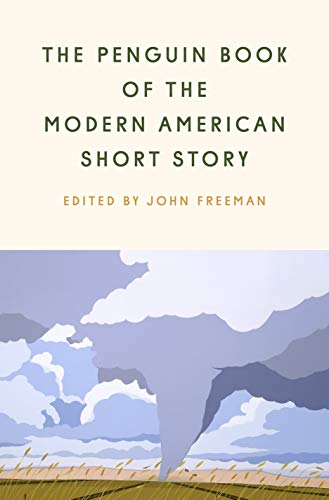 Every year, there is a pilgrimage (of sorts). Creative writers and other lovers of the short story set aside time and resources to go buy (or to search online for) at least three books: The Pushcart Prize Anthology, which collects and awards the best stories from among those the top American literary journals publish on a given year; the O. Henry Prize Stories, which does something similar; and the Best American Short Stories, always co-edited by a master of the English-language short form. For the short story lovers who buy these books, they are one of the most effective (and enjoyable) ways to learn the craft, to understand its mores, to read those authors who managed to break through, to push things further, who might have unwittingly marked the arrival of something new in fiction. In literature.

Now, The Penguin Book of the Modern American Story threatens to disrupt that list by (hopefully) adding to it, and a few elements suggest it will succeed.

The first of those is insight. Right away, the word “best” is not in the title. (This is surely a sign of wisdom, since, who can say a selection of anything can ever actually be the absolute best? Says who, and according to what, exactly?) And, while “best” is out, the word “modern” is in. And wasn’t it about time an anthology focused on literature reflecting our post 1960s lives, a time that changed the way we think, read, feel and resist, the backlash against the tiniest social justice gain since then, felt viscerally to this day?

“How much more fresh air there is in the American short story when it’s not presumed to be realistic. When it isn’t bent toward an American dream.”

Those words are from the introduction by editor John Freeman, his presence the second element signaling this book might be one to collect, a best’s best collection. Freeman, also publisher and editor of Freeman’s, a popular, and very well-regarded themed biannual, is, perhaps, himself, a literary star, known for his exquisite taste and abilities as a thoughtful editor since his days at Granta magazine.

“I learned to steal. Pomegranates and figs from blind old Guca’s yard, Blue Waltz perfume, Tangee lipstick from Kress’s, licorice and sodas from the Sunshine Grocery. Stores delivered then, and one day the Sunshine delivery boy was bringing groceries to both our houses just as Hope and I were getting home, eating banana Popsicles. Our mothers were both outside.

“Your kids stole them Popsicles!” he said.

My mother slapped me whack whack. “Get inside, you criminal lying cheating brat!” But Mrs. Haddad said, “You lousy liar! Hjaddadinah! Tlajhama! Don’t you talk bad about my kids! I’m not going to your store no more!’

And there’s Tobias Wolff and his unforgettable short-short, “Bullet in the Brain”:

“The bullet smashed Anders' skull and ploughed through his brain and exited behind his right ear, scattering shards of bone into the cerebral cortex, the corpus callosum, back toward the basal ganglia, and down into the thalamus. But before all this occurred, the first appearance of the bullet in the cerebrum set off a crackling chain of ion transports and neurotransmissions. Because of their peculiar origin these traced a peculiar patter, flukishly calling to life a summer afternoon some forty years past, and long since lost to memory. After striking the cranium the bullet was moving at 900 feet per second, a pathetically sluggish, glacial pace compared to the synaptic lighting that flashed around it. Once in the brain, that is, the bullet came under the mediation of brain time, which gave Anders plenty of leisure to contemplate the scene that, in a phrase he would have abhorred, ‘passed before his eyes.’"

And there is Sandra Cisneros. Once upon a time, her utterly heartbreaking short stories might have been dismissed by a serious anthology because of their length. For decades (and in some quarters still), very short stories were considered lazy, not possibly requiring the mastery of longer tales. Now Flash Fiction is understood for what it is: a brilliant form requiring much from its writers to say, convincingly and compellingly, in a few lines, what other stories take their time to convey.

In The Penguin Book of the Modern American Story, there are several flash or micro-fiction pieces, given their due as part of a modern tradition of short-form storytelling. Here is one of the paragraphs from Cisneros’ three-paragraph wonder, “Salvador Late or Early,” so you may judge for yourself:

“Salvador inside that wrinkled shirt, inside that throat that must clear itself and apologize each time it speaks, inside that forty-pound body of boy with its geography of scars, its history of hurt, limbs stuffed with feathers and rags, in what part of the eyes, in what part of the heart, in that cage of the chest where something throbs with both fists and knows only what Salvador knows, inside that body too small to contain the hundred balloons of happiness, the single guitar of grief, is a boy like any other disappearing out the door, beside the schoolyard gate, where he has told his brothers they must wait. Collects the hands of Cecilio and Arturito, scuttles off dodging the many schoolyard colors, the elbows and wrists criss-crossing, the several shoes running. Grows smaller and smaller to the eye, dissolves into the bright horizon, flutters in the air before disappearing like a memory of kites.”

And it’s not just flash and other short forms. It’s the influence of women and of feminist theory, the political stories that used to be deemed unseemly when people were into keeping up with the Joneses and being a “normal family.” There’s even a gust of hope and faith, which Freeman alludes to when discussing “Anyone Can do It,” a delightful short story by Manuel Muñoz:

“When the heroine of Muñoz’s story is tricked by a fellow field hand who makes off with her car, the woman hitches a ride from a foreman back into town. Dropping her off, the man hands her a twenty-dollar bill. ‘It’s not your fault,’ he says. ‘And I’m not defending her for what she did. But I believe any story that anybody tells me. You can’t be to blame if you got faith in people.’ And so we turn to tales to lift us up, to make things brighter, to remind us that so much depends on where you start from.”

So much may also depend on understanding what this book gets and reflects: we’ve been through heaven and hell in single lifetimes. The last 50, 60 years have seen change happen at humanity-defying speeds, while some of the basic things we started out wanting to change remain, entrenched, and stubbornly so.

But what if the thing to do is to forge forward? To read this important book cover to cover, referring back to it over time, remembering what we’ve lived and how it touched us in story, that we may be inspired to keep the good already within us, while remembering the bad and its lessons, so we never allow it to happen again.