The Penguin and the Leviathan: How Cooperation Triumphs over Self-Interest 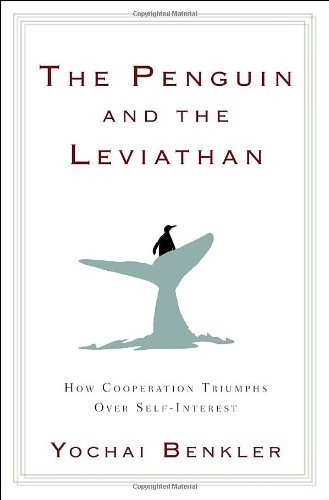 “Dr. Benkler [presses], convincingly, that cooperation and collaboration represent a truer nature of people not just on a personal level, but also in society and business.”

Yochai Benkler’s first mass market book, The Penguin and the Leviathan: How Cooperation Triumphs over Self-Interest, is his preliminary attempt to reach a broad audience with a very encouraging theory: the idea that humans are fundamentally selfish is incorrect and people act far more altruistically than not. But the book falls just shy of its mark.

A distinguished professor of Entrepreneurial Legal Studies at Harvard University, Professor Benkler reflects his main contention in the book’s title, in which two separate analogies balance the two possible views of human nature.

Philosopher Thomas Hobbe’s treatise, Leviathan, stands for the concept that humans are, at their core, “fundamentally universally selfish;” conversely, the Penguin represents our better half. While we may not all be saints, “we are capable of virtue, and that we need not be robotic slaves to the . . . Leviathan. . . .” Its name comes from the mascot of the free operating system, Linux—a cheery little penguin named “Tux.”

Dr. Benkler then spends the remainder of his book pressing, convincingly, that cooperation and collaboration represent a truer nature of people not just on a personal level, but also in society and business. This optimistic view is supported by examples as varied as the expected discussion on Linux and Wikipedia through some unexpected examples involving lobster fishermen and the British rock group Radiohead.

The author notes that, with the ease in which people can communicate and share in the current wired world, the opportunities for cooperation and collaboration will only increase, another encouraging note in a book filled with them.

Unfortunately, this is not to say that the book is perfect; Professor Benkler’s book prior to Penguin was The Wealth of Networks: How Social Production Transforms Markets and Freedom. This first book by the author won a number of awards for social and ethical relevance in communications. But Wealth of Networks was printed by an academic press, Yale University, for an academic audience. In some sense, The Penguin and the Leviathan inherits both the good and the bad of this pedigree.

While it does have the academic rigor necessary to support its thesis— more than enough, actually—the book falters as often as it flies. Dr. Benkler fleshes out his ideas to the point of repetition and for every fascinating anecdote on why there are no job postings for New York City doormen, there are an almost equal number of nonessential details and examples that don’t further the points along.

The Penguin and the Leviathan: How Cooperation Triumphs over Self-Interest is a fine book for those looking to read an almost textbook-like account on the subject. For those of us looking for a little more entertainment and less scholarly erudition in our business fare, The Penguin may not be the bird of choice.