Pencil: A Story with a Point 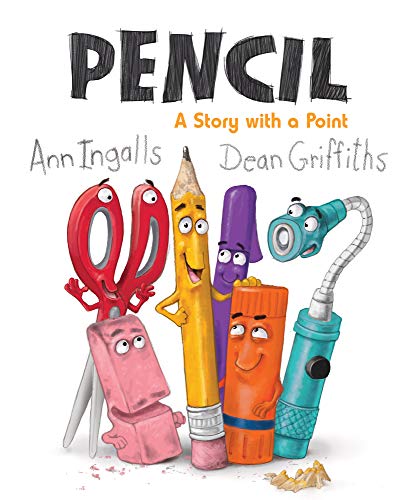 The picture book Pencil: A Story with a Point, is a book about a pencil with feelings, and a tablet with a mouth, and junk drawer filled with inanimate things with good ideas and silly puns coming out of their mouths. It sounds silly. It is silly. But it does make a point.

Tablet can make movies, draw in color, and message Grandma in South Dakota.

The point is that sometimes old-fashioned is the best way. Even after Pencil has been chewed up by the dog, he is still good for something when Tablet gets knocked off the table by the dog.

This book could’ve also been named, Blame It on the Dog.

Number two pencil? A bad joke, but it is somehow still funny.

When Pencil lands in the junk drawer Ruler says, “You don’t measure up.” Later on in the story, Scissors says, “You’re a cut above the rest.” Marker says, “Our friendship is permanent.”

The sister named Jasmine gets Pencil out of the junk drawer. When Jackson loses his tablet, Pencil goes back to the junk drawer for reinforcements. The solution is a flip book made from Sticky Notes and Paperclip. Jackson gets creative and draws on every page. Pencil saves the day. Jasmine’s loss of Pencil is not addressed.

The whole story is a format for a bunch of silly puns. Older kids will love it when they get the double meanings of the various school supplies. When Battery says, “He’ll get a real charge out of that,” the astute second grader will understand the double meaning of charge and get the joke.

This picture book might sound nice when read to a four year old, but the eight year old will get the humor and be able to suspend reality long enough to think a bunch of inanimate classroom objects can talk.

The digital art with lots of white space is hilarious, the kids are likable and diverse, and the speech bubbles help each object say the right thing. The end papers are robin’s egg blue and have the various white pages of the flip book with the dog as the star.

Corny as it is, Pencil: A Story with a Point is great fun. Every librarian should make it a point to order this delightful book.