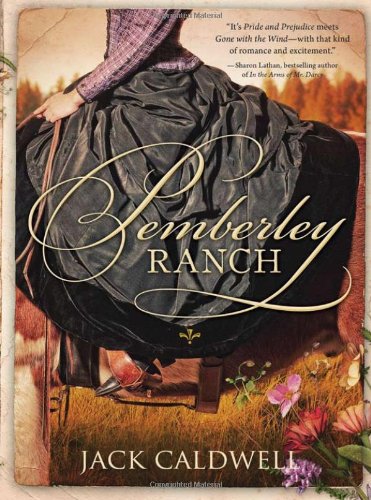 Mr. Darcy as a Wild West cowboy? A dungaree-clad Elizabeth Bennett flying over the range on her painted pony? Pride and Prejudice is done Texas-style in Jack Caldwell’s debut novel, Pemberley Ranch. Whether or not a devotee of the esteemed classic novel will want to mosey on over to the antebellum cattle town of Rosings, depends upon one’s taste for shifting the time and place of Austen’s beloved characters. If one’s taste is for Pride and Prejudice and Zombies and the numerous sequels, prequels, and spin-offs, then Caldwell’s take will be heartily enjoyed. For the Jane Austen purist, it might be a bit harder to swallow.

Where Caldwell excels is in fleshing out the masculinity of the buttoned-up Regency Era Darcy. Here the sense of his authority and command over outlaws and swindlers is impressive to behold. He’s as fast with his gun as he is in spying on a skinny-dipping “Beth.” He is a man that other men can’t help admiring, and one who causes many a woman to swoon.

However, it is Darcy’s inner turmoil that is most captivating. As a Confederate soldier, he was flogged within an inch of his life. If not for the attentions of his comrade “Dr.” Bingley, he would not have survived. The wounds run deep. He collapses during a night of heavy drinking after “Beth” refuses his marriage proposal. Yes, the self-contained Darcy gets intoxicated.

At times, the Annie Oakley approach to Elizabeth is a bit much. Being a crack shot with a rifle during a Custer’s Last Stand/Alamo type scene borders on the unbelievable. While the original Elizabeth was more than a tea-sipping lady in a parlor, she also wasn’t above and beyond her time period in terms of her station and decorum. Caldwell’s Beth is a little more tomboy and a little less intellectual.

The more inspired anecdotes involve the supporting cast. Fitzwilliam and Charlotte Lucas have a secret, passionate affair. Caroline Bingley suffers post-traumatic stress disorder from Sherman’s March to the Sea and the burning of her Georgia home. Lily (Lydia) is a saloon girl thrown away by town bad boy George Whitehead (Wickham). Mrs. Bennett possesses common sense and the esteem of her husband.

Another tidbit that Caldwell gives to fans is introducing characters from other Jane Austen novels into the story. Henry Tilney of Northanger Abbey is the town clergyman and devoted suitor of pious Mary. Emma’s Mr. Knightley and his brother are the entrepreneurs that Darcy invests in to bring the railroad to Rosings. While bit players like Anne de Bourgh and Georgiana Darcy are given more of a voice.

Overall, if you’re willing to hop in the saddle, you’ll enjoy the ride.