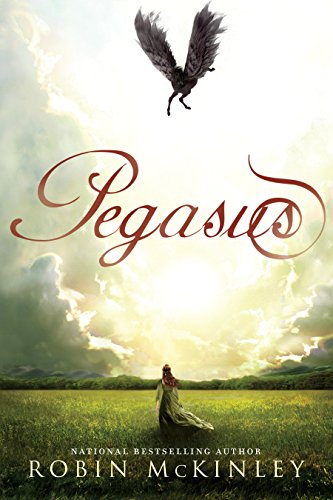 Robin Mckinley’s books are always amazing, and this one is no exception.

Pegasus follows her usual pattern of world-building and character introduction, sliding quietly into a major change for the world, and culminating in an adventure like none other—but this one is something else, too. It’s the first time she’s written a book that leads directly into a second, not a sequel, but a continuation. And it’s the first time the adventure isn’t the end. In Pegasus, it’s literally just the beginning, even though it doesn’t start until half way through the book.

The central adventure—that the Princess Sylvi is the first human to visit the Pegasus home country—is what changes her as a person, but also what leads to the uproar and drama that pushes the rest of the book directly into the second volume, and the break is a killer. Cliffhangers are designed to force the reader to want to know what happens next, and this one happens in such a fugue, such a pulling-together of all the drama and the emotion, that the end of the book is a shock almost like a physical blow. The fact that there are no more pages afterward, that we have to wait for the next one to know how it all comes out, makes its impact all the harder and more devastating.

This is Robin McKinley at her best. The world is detailed and clear in unexpected ways, with a political system that makes perfect sense while still feeling different from what has come before in the genre.

The characters are well-drawn and fleshed out through a combination of direct interaction with and response to Sylvi, and through her flashbacks and memories. The timeline of the book is wide-ranging and meandering, flowing effortlessly between what is happening in the now and what’s being thought of, learned about, remembered and relived in the past.

And the Pegasus are simultaneously familiar and entirely alien, which is one of the things McKinley does particularly well. We think we know what a Pegasus looks like, but she shows us something different, something stranger and more beautiful, and tells us what their existence means to the world and the people in it. They are ultimately unknowable—and there are plots and conspiracies to keep them that way that drive much of the second half of the book. Sylvi’s attempts to learn who and what the Pegasus are reads something like a love story, and is diametrically opposed to the plots she keeps running into.

The book holds echoes of the best of her previous work: from the mention of a honeyed cup that reminds the reader of Chalice, to the mentions of dragons that remind the reader of The Hero and the Crown, to the ever-present fleethounds that crop up in most of her books. The effect is to make it seem like maybe all her books happen in the same world. Not the same country, because terrain and language and history—all the world-building elements—are different from book to book; but perhaps it is the same universe, where things could be held in common without ever rehashing old ideas.

Pegasus is a beautiful book, stunning in its clarity and storytelling as well as in its characterization and background. It is characteristic of McKinley to wander into her plots, but it never seems to be aimless wandering; her plots wander the way life does, where sometimes things happen to distract us from the main plot, but we always come back, and the distractions always turn out to have meaning and reason.

I had the distinct and pleasurable sensation that all the previous books were test runs to figure out how to write this one. It’s long for McKinley—almost 400 pages—and the story continues. This is exactly what McKinley fans have been hoping for: more story. If we can’t get more Damar tales, it’s worth it to have gotten us to Balsinland and Rhiandomeer. McKinley has become more prolific in recent years. For her fans and new readers of her fantasies, this fact is only for the best.