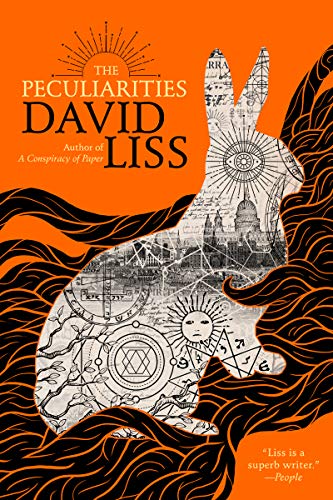 “Even as The Peculiarities veers far from the Benjamin Weaver template into strange and unsettling new terrain, infused with dark magic and vivid body horror, it should delight and surprise those who reveled in the intricate plotting, exquisite pacing, crackling suspense, and fascinating historical rabbit hole revelations that distinguished his earlier work.”

The return of David Liss to the sub-subgenre of British high-finance historical thriller that he launched with his acclaimed first novel, A Conspiracy of Paper, with his newest novel, The Peculiarities, gives fans of his earlier work much cause for celebration. Even as The Peculiarities veers far from the Benjamin Weaver template into strange and unsettling new terrain, infused with dark magic and vivid body horror, it should delight and surprise those who reveled in the intricate plotting, exquisite pacing, crackling suspense, and fascinating historical rabbit hole revelations that distinguished his earlier work.

The “Peculiarities” referenced in the new novel’s title concern the rumored emergence of strange and disturbing afflictions and mutations in 1899 London—reported in the city’s less reputable papers—tales of vampires, werewolves, women giving birth to rabbits, “people possessed by spirits and living men whose spirits have become trapped in horses.” These peculiarities appear to attack their unsuspecting victims through aggressive and remorseless traveling fogs.

The book’s central character, Thomas Thresher, dissolute younger son of a prominent London banker, treats these reports skeptically until he observes a strange tendency of his own skin to begin sprouting emerald-green leaves, and realizes that—however slowly at first, and imperceptibly to others—he is becoming a tree.

As the novel begins, following the death of his father, 23-year-old Thomas has been plucked from his presumed role as the ne’er-do-well second son, and assigned a dreary, lower-level clerk’s position at the bank. His cold and dismissive older brother, Walter, now Thresher’s Bank governor, has just informed him that he is to court and marry a young Jewish woman named Esther Feldstein, in fulfillment of his duty to the family bank. When Thomas protests, Walter hisses in response, “You are not required to understand. You are required to obey.”

Esther appears to have no more romantic interest in Thomas than he has in her. But after a contentious first meeting, in which the two engaged in a bristling and candid debate over the nature of the Peculiarities, and Esther observed that they predominantly afflict London’s lower classes, the two fall into an unexpected partnership, as they join forces to investigate irregularities in Thresher Bank’s financial dealings and practices, and the financial root of the desired alliance between their two families fueling the insistence that they marry.

Their inquiries lead them to a curious pattern of debts purchased by the bank linked only by their association with magic and cases of peculiar affliction. Their investigation kicks into high gear during their first foray into the Hermetic Order of the Golden Dawn, an occult society founded in London 11 years earlier. There they encounter a number of the Order’s real-life members, including leader Samuel MacGregor Mathers, Anglo-Irish poet William Butler Yeats and his revolutionary muse Maud Gonne, writer Arthur Conan “Artie” Doyle, and legendary occultist Aleister Crowley, later known as the “wickedest man in the world.”

Though intermittently performative, the Order’s old brand of magic is devoid of card tricks and sleight of hand, and focused primarily on opening gateways to other realms. For the most part, Liss portrays the Order as day trippers and dilettantes, enraptured with the ceremony and cosplay of ancient magic but mostly inept at its implementation. The notable exception is Crowley, who emerges as every bit the real deal and a pivotal figure in the book, his brilliance, resourcefulness, and vast magical knowledge proving indispensable again and again, and mitigating his incessant boastful bluster and titanic ego.

As violence erupts around them, the Peculiarities put the city in greater and greater peril, and Thresher’s Bank increasingly appears the cause of it all. Thomas, Esther, Crowley, and a fearless half-wolf girl named Ruby Topping (afflicted, like Thomas, by body-altering Peculiarities) join forces to unravel the mystery and turn back the tide.

Thomas, who had previously pursued a degree in mathematics before his father and brother convinced him to abandon it, generally resists the notion of supernatural forces exerting a profound influence in the world, even as he confronts the reality of their attack on the city, and the undeniable fact that he is becoming a tree. Still, he continues to look for mathematical and scientific solutions even as he struggles to learn enough magic to undo the magic that is transforming him.

Some of the book’s most fascinating moments arise from Thomas’s and Crowley’s debates on the subject. Crowley regards the incursion of dark magic as more than a curse to reverse; he perceives it as the dawn of a new era, part of a general awakening to the presence and influence of unseen realms.

“This century, the century of steam, draws to a close, and it saw the world transformed,” Crowley declares. “A man from 1799 would not recognize the world in which we live, and now, just as we are getting used to what we have wrought, the world changes again. The twentieth century will be unrecognizable to us—an age of magic. Just as there has been an industrial revolution, there will now be a magical revolution. . . . If you deny it, you are like a bewigged eighteenth-century gentleman who thinks factories are but a momentary folly. The Peculiarities have changed everything by bringing magic out into the open, and men are too greedy not to profit from these changes. Men like your brother, who live to line their pockets, will become obsolete if they do not adapt.”

As the pace quickens, the danger heightens, and the action reaches breakneck pace and fever pitch, The Peculiarities never quite goes fully dystopian, although Liss (largely through the insights of the perceptive and unsentimental Esther Feldstein) exhibits an acute understanding of the maxim that the frightening assault of dark forces on the world reaches dystopian proportions only when efforts to quarantine it to the poor and powerless prove unsuccessful. As the violence and terror break free of the dark and dingy streets of East London and threaten to engulf the city, elites and underclass alike, The Peculiarities reaches a thrilling crescendo that matches Liss’ finest work.