Peak Experiences: Danger, Death, and Daring in the Mountains of the Northeast 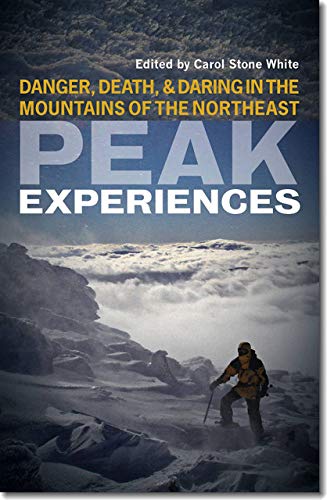 “. . . best read in small sessions to avoid the armchair traveler’s inevitable reaction: ‘What were they thinking?’”

If you don’t go for extreme outdoor sports, such as hiking in the mountains, then this book will simultaneously give you a clue why other people do it while making you wonder why so many smart people can be so dumb.

It will also make you marvel over folks who get pleasure out of what sure looks like masochism to the uninitiated.

If you are among those who indeed enjoy mountain hiking (especially in winter), then this book is a stinging reminder to keep perspective and step carefully, so that you, too, don’t end up a cautionary tale.

The mountains of northeastern U.S. aren’t very tall compared to the Rockies of the west or ranges in other countries, but they have fast-changing, often wild weather that can blindside the unwary and turn an afternoon’s outing into a fatal misadventure.

Peak Experiences shares more than 50 such stories, mainly about the near misses (vs. the fatalities) that taught the adventurers vital lessons.

Those lessons boil down to two: (1) No matter how strong and experienced you are, Mother Nature is more powerful; and (2) the Boy Scouts have it right, so it’s best to adopt their motto—Be Prepared. Just about anything can happen out there in the wilderness, and sooner or later one of those things will happen to you.

Ms. White, the collection’s editor, is a brave woman in that she shares some of her own outings-gone-wrong despite the embarrassment factor. She is a strong and experienced hiker who makes an effort to Be Prepared yet got into trouble anyway. Same applies to the majority of the contributors, though a few neophytes’ stories are included.

Their misadventures occur primarily in New Hampshire’s White Mountains, New York’s Adirondacks, and at various points along the Appalachian Trail, usually in Maine. The collection is best read in small sessions to avoid the armchair traveler’s inevitable reaction: “What were they thinking?”

The most common hazard is surprise change in environmental conditions. Next is trying to do something else—looking, talking, eating—while placing down a foot. In some instances, arrogance is the culprit (“they felt they were invincible”), while in others it’s a matter of not understanding the “difference between difficulty and danger” or simply not knowing what you’re doing.

After a while, the litany of mishaps-from-the-same-causes gets monotonous, so the stories that stand out are the oddballs. One chap, for instance, hiked the AT carrying a tuba. His tale is in the “Odysseys” section, which contains the most interesting stories in the strongest voices of the book.

The book is divided into subject related sections—“Weatherwise or Otherwise;” “Rescues in the Mountains;” “A Treacherous Place in the Peaks;” “Dangers of Water in the Mountains;” “Animal and Avian Behavior;” the aforementioned “Odysseys;” and “Lost, Unprepared, Leader Lapses, and Bushwhacked.”

It also contains helpful appendices covering clubs, organizations, and safety guidelines, along with interesting notes and suggestions for further reading, plus a glossary and some black-and-white photos.

In general, the stories tell much about the “how” and very little about the “why” of these hikers’ experiences. Fortunately, a few of the writers give us some insight. One puts it eloquently:

“What is the allure? What entices us into the unknown on this day, to explore one of Baxter’s wildest corners? What draws me time and again to immerse myself in the natural world for a day or a week or more? Is it the tingling anticipation and thrill of what might be around the next bend? Can it be the rawness, face to face with the elements, that reaches the depths of my soul and makes me feel alive? It is not merely the dramatic, sweeping views from a mountaintop or the soothing musical notes of the white-throated sparrow or the fragrant whiff of a balsam fir. Not triumphing over nature, not conquering mountains, but rather co-existing, hand-in-hand, part of the environment of trees, rocks, and sky. It is more the feeling of wholeness and rightness, of being in synchrony with the universe, a sense that all is well with the world. It is feeling deep peacefulness and rare quietude from breathing in and soaking up, from observing, listening, and respecting. It is the miraculous simplicity of the lessons revealed when we dare venture beyond our secure confines.”

Another puts it in Finnish terms, using their word sisu, which means: a “special strength and stubborn determination to continue and overcome in the moment of adversity. It is a combination of stamina, courage, and obstinacy held in reserve for hard times, an extraordinary endurance, an inner fire.”

Sisu seems to apply equally to folks getting out of a difficult situation and folks who seek such difficulty, like the marathoners who try to set speed records or complete the entire 2,180 miles of the Appalachian Trail without a break.

Yet one of the more poignant and beautiful moments in the book comes from the report of a hiker watching thirteen pairs of ravens practicing aerial maneuvers for nearly an hour. Nothing else happened on that hiker’s trip; the story is merely one of wonder that helps explain a person’s lust for the heights.

Whether these hikers are savvy or foolish, out in summer or winter, on a day trip or a marathon, climbing mountaintops or bushwhacking the slopes, their “peak experiences” make for fascinating and educational reading.

Ms. White does a service to both outdoors-people and their observers in collecting these tales in one volume.