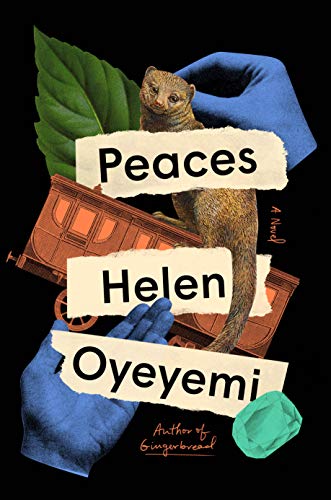 “Helen Oyeyemi’s craft improves with each successive novel. Her skill and style recall Borges’ fables or Kazuo Ishiguro’s recent fairy tales, but her writing may ultimately surpass both of those established masters.”

Helen Oyeyemi is a writer of singular genius. Her work blends magic realism, slipstream, and literary fiction into disorienting, beautiful narratives open to both terror and love. Peaces, her seventh novel, launches into a not-quite-honeymoon of delightful strangeness.

Train owner Ava Kapoor extends her hospitality with the sole caveat that she never be addressed, seen, or acknowledged. But in the moments after they board, Xavier becomes certain he’s seen their hostess: “‘What was she like? I don’t know. I don’t even know what you’re asking, Otto. But she held up a sign. Well, a word she’d written on a piece of paper.’

“‘But it could also have said HELP.’”

Uncertain whether to behave chivalrously or accept the initial instruction to avoid Ava Kapoor at all costs, Otto and Xavier explore the train, discovering a sauna and a bazaar, an art gallery and an elaborate garden. There’s an echo here of Bong Joon-Ho’s Snowpiercer, low on apocalyptic terror but still markedly uneasy. If the train’s existence and nature are reflections of one person’s whims, then those whims might as easily be destructive as delightful.

Relax into the whimsicality, though, and Peaces becomes recognizable as a Wes Anderson movie stripped of its dedication to whiteness and fully awake to the complicities and consequences of imperialism. In spite of the steampunk-y, fantastic details, the novel is anchored in contemporary England. It’s multiethnic and socially tangled, fully technologized, and one step away from the world through which The Lucky Day travels. Outside the windows is a landscape as unreliable and unmappable as any Oyeyemi has yet summoned.

Still, Peaces resists categorization as fantasy. Mundanity is crucial to the novel’s power. In fantasy fiction, “reality” is a fluid thing, acceptably unstable. In Oyeyemi’s work, reality’s instability is much more alarming. Is it a failure of judgement, a manifestation of mental illness, a cruel prank, or generations-long vendetta playing out?

Peaces is neither violent nor grotesque. It carries enormous tension, but that tension resides entirely within the characters. Narrator Otto Montague-Shin’s sense of the world has been askew for some years, since he ran into a burning building to rescue a man who didn’t exist. Train-mistress Ava Kapoor’s personal history balances theremin-playing and an ongoing denial of her benefactor’s son. Two people, apparently unconnected, suffer from the existence, or non-existence, of a man whose intentions are unreadable and whose presence is either impending or vacant.

Helen Oyeyemi’s craft improves with each successive novel. Her skill and style recall Borges’ fables or Kazuo Ishiguro’s recent fairy tales, but her writing may ultimately surpass both of those established masters. Peaces is a book to be read over, year after year, and marveled at. If it doesn’t become an acknowledged masterpiece, it will only be because each reader decides to keep this treasure private, only for herself.