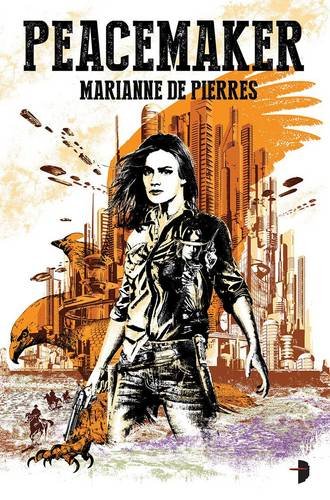 “If you like your thrillers a little on the strange and dystopian side or your dystopias a little on the mythological and crime-solving side, Peacemaker could be the start of a series you're looking for.”

Peacemaker is one of those rare books that's sort of a mess of plot setup at the beginning, but a compelling launch of a new series by the end.

Virgin Jackson is a ranger at the last patch of wild Outback in Australia, a massive park completely surrounded by an even more massive city. The city is divided between false touristy areas conflating the Outback with the American Old West, and a number of rough gang-run and religion-run sections where tourists—and most locals—don't go.

Into Virgin Jackson’s small but manageable life comes Marshal Nate Sixkiller, a Native American lawman from the U.S. West who is assigned to her as a partner under suspicious circumstances and brings a lot of mystery with him.

He arrives the same day as Virgin finds a dead body in her park. A dead body that didn't turn up on the scans and wasn't checked in, and who seems to have been killed by a giant bird that attacked and then disappeared. She and Sixkiller hunt down the identity of the body and his killer and come in contact with conspiracies, hidden truths, and a number of very entertaining unsavory characters.

The world is compelling as the story unfolds, and it's when Virgin stops lying and closing people off and starts asking for help and going out into the wilder parts of the city that the story comes together and really takes off.

The interaction between the wild and colorful characters who head the various crime factions more than makes up for the fact that until that midpoint, Virgin herself seems to be making her own life more difficult than it needs to be, which is frustrating. It also helps that her best friend Caro is saucy and entertaining, Sixkiller is a charming sort of mystery man, the people she works with are all strange and interesting, her boyfriend is a different sort of compelling unknown, and the plot, though scattered in the first half, brings up a lot of interesting world building and stories for the series to explore—and then comes together quickly and addictively as the story heads into its third act.

The end of the book leaves the reader wanting more of this world, wanting to see how the revelations of what is actually going on change the closed-off and prickly Virgin. This is a world that needs a hero, and it's possible she could be it.

Despite the vaguely ridiculous names and the loose plot structure that leaves a bit much to the reader to string together, the pacing is good throughout and cannonballs quite excitingly toward the finale, which, in turn, launches nicely into wherever the next book is going.

Really, it's the setting that shines in a lot of this book. Virgin navigates a world where crime has taken over because the cops can't get funding, where nature is entirely encapsulated and sold as a commodity, where lots of various and strangely matched ideas are vying for control, and where nothing is really what it seems—not even Virgin herself, even though she's the first-person POV character.

As a whole, Peacemaker is a good book to start a series. There are some genuinely interesting ideas about the interpretation of mythology and how indigenous spirituality can apply as the world gets more corrupt and more urbanized; those ideas should fuel a very interesting new take on the corrupt-future-world trope.

If you like your thrillers a little on the strange and dystopian side or your dystopias a little on the mythological and crime-solving side, Peacemaker could be the start of a series you're looking for. It is, so far, quite readable even when it's unclear what the story is doing, and the wide range of nontraditional characters are entertaining and interesting to watch.