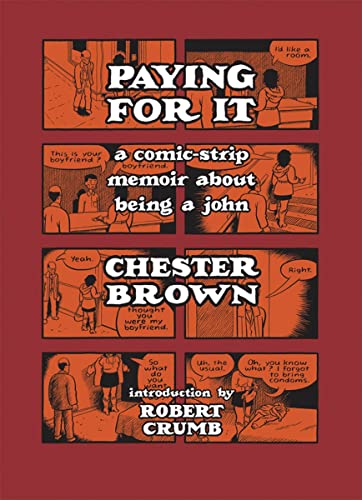 Paying for It is the intensely personal memoir of cartoonist Chester Brown (Louis Riel) and the relationships, experiences, and reasoning which led him to leave behind a life of monogamous romantic relationships and chose instead to regularly pay for sex with prostitutes.

Though this choice is arguably quite controversial, through author Brown’s honest (and at times almost neurotically overanalyzed) rationale, we are constantly inside the artist’s head every step of the way, from his last girlfriend, to his first experiences paying for sex, all the way through to a long-term relationship with a call girl known in the book as “Denise.”

Mr. Brown proves himself to be quite rational, even if his views often skew to the unconventional. It would likely be a common mistake to expect this to be an autobiography full of pathetic self loathing or possibly filled with sordid eroticism, or even a sort of romantic nihilism, but instead he succeeds masterfully in his displays of both courage and character as he unabashedly takes us on a mundanely personal journey, one which lays his male Id bare and in the process demystifies the secret industry of professional sex workers. The respect and pathos that Mr. Brown displays for these women, even as he timidly solicits them to satisfy his sexual needs, is charmingly quirky in Brown’s awkward oddball manner.

Though Mr. Brown certainly seeks to justify his behavior to himself and others, at no point does he let himself off the hook, utilizing the various opinions of family and friends to challenge his convictions, including fellow cartoonists Joe Matt (Peepshow) and Seth (Palookaville)—a nice treat for fans of these artists’s works.

These points of view and (sometimes heated) arguments help shape Mr. Brown’s ever evolving opinion of the sex-worker industry, even as the opinions of those closest to him evolve along with him. The book’s message (particularly in the thoroughly researched appendix) becomes a cogent treatise in support of the decriminalization of prostitution, and Mr. Brown takes great lengths to address many common arguments and misunderstandings concerning this controversial topic. Mr. Brown goes beyond mere personal autobiographical introspection to shine a light on matters of personal ownership, human sexual rights, and ultimately human dignity.

Without a shred of shame, Chester Brown proudly shows us a world where a life of frequenting prostitutes need not be one devoid of intimacy, nor need even be an assault on love.

The author certainly seems to be a man of another time, one which predates our accepted modern views of fidelity and marriage for love, but perhaps it is he who is truly the one with the mature modern sensibilities free of jealousy, possessiveness, and the domestic strife that seems inevitable for so many couples.

Read Paying for It and decide for yourself.