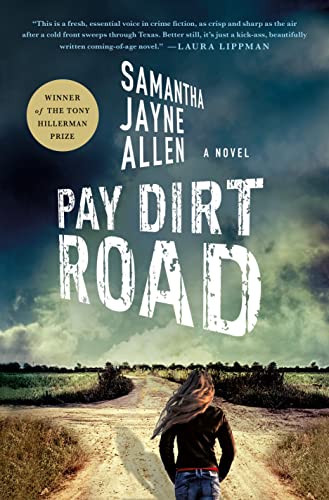 “Drawing on her past relationships and experiences, Annie begins to put together the pieces of a mystery that involve old loves, a horribly scarring incident years before at a fraternity party, a family tragedy that drove her father and grandfather apart, and, of course, greed.”

Thomas Wolfe famously titled one of his novels You Can’t Go Home Again. Published posthumously, it tells of an author’s shunning by his hometown after writing a novel about it. Samantha Jayne Allen’s new novel Pay Dirt Road might well have been titled You Shouldn’t Go Home Again.

That is the lesson its heroine, Annie McIntyre, learns after four years away from her fictional hometown of Garnett, Texas. Having left for college full of ambition and idealism, maybe even with dreams of becoming a lawyer, she returns home without a plan, or even direction, for her future. Now waitressing at a local diner, her dreams are on hold while she tries to make sense of her place in the world.

“Waiting tables wasn’t exactly how I envisioned using my degree. I’d say moving back to Garnett wasn’t the plan either, but that would indicate I had one. College graduation four months in the rearview—a private school I’d gone on scholarship to, at that—you’d think the future would feel wide open with infinite choices, but I was circling, waiting for what else I wasn’t sure.”

Though these facts are specific to Annie’s story, many readers will likely identify with the broader context. It would be trite to say that this theme is universal, but it’s just one of the things that makes the story appeal to a broad audience.

Unfulfilled, Annie falls back on the familiar and accepts a job offer to work for her grandfather, Leroy, a retired sheriff, in his private investigation firm. Her role is primarily clerical, transcribing notes and doing some filing, but she views it as an opportunity to supplement her income while treading water about her future.

Leroy’s partner, Mary-Pat Zimmerman, basically runs the firm as Leroy is “all but retired.” Not only is he retired, but he also carries baggage that threatens to drag the firm down. Sometime earlier, Leroy and Mary-Pat had solved a notorious local cold case that gave it good publicity and, as Annie says, “procured in the community a sense of goodwill that for a time absolved my grandfather of his other notorieties: drinking and general recklessness chief among them.”

The narrative begins slowly as characters are introduced and Annie’s frustrations and inner sense of impotency over her own future are developed, but things pick up when her co-worker at the diner, Victoria, goes missing. When Victoria’s body is found, and the missing persons case turns to a murder investigation, Annie pays a visit to the crime scene.

With that visit, her personal sense of responsibility and justice kicks in, as does the pace of the narrative, and it changes the course of her future. “If I hadn’t gone to the place that day,” she says, “hadn’t witnessed the place she’d lain, I likely would have done something different with my life.”

With Annie, as with most people, nostalgia has its siren call. She learns, though, that while events and relationships from the past may influence our futures, or, as Shakespeare said, “past is prelude,” it doesn’t have to dictate those futures. Life is about learning from, and sometimes overcoming, the past. She learns that a “waltz through time” doesn’t require that the past be “quicksand.”

Drawing on her past relationships and experiences, Annie begins to put together the pieces of a mystery that involve old loves, a horribly scarring incident years before at a fraternity party, a family tragedy that drove her father and grandfather apart, and, of course, greed. In the process, she comes to grip with her own aimlessness and begins to understand why she was drawn to return home.

It was not, she says, “some sense of purpose to be found at the root,” but instead it was “because here I loved and loved well” and, “God, if there was one, seemed closer when I thought about the ones I missed.”

While Pay Dirt Road entertains, it also makes the reader think beyond the confines of the story. That’s what good books are supposed to do.